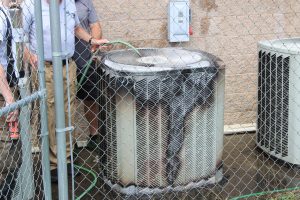 On Sep.3 at approximately 1:55 p.m., a heat and air unit attached to the Dade County High School Hitting Facility burst into flames.

The cause of the fire was has yet to be determined. DCHS Assistant Principal and Athletic Director Brent Cooper said he was one of only a few spectators that saw the flames.

“The flames went clear above the gutters,” Cooper said. “I think it might have actually melted a hole in the gutters right above it.”

DCS Superintendent of Schools Dr. Jan Irons Harris released a statement to parents immediately following the fire being put out.

“We just had an air conditioning unit catch fire at the DCHS Hitting Facility,” Harris said. “The fire is out. No one is hurt. Everyone is fine.”