In 2022, Dade County residents thoroughly utilized the many resources provided by the Dade County Public Library. The public library is important to many citizens not only for books, but also for internet and computer access, printers and scanners, entertaining and educational programs, and meeting space.

The year’s computer usage was 3,200, the internet/wireless usage was 8,225, and printer usage was 6,568 (not including additional print jobs sent directly to librarian’s computers). People also utilize the fax machine, sending 96 faxes in 2022. These digital resources are just as important as the print resources to many Dade County residents. 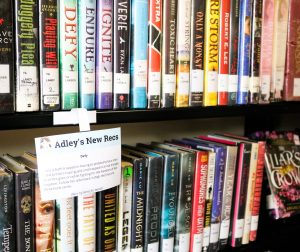 Photo by Lydia Berglar – Adley serves on the Teen Advisory Board and provides recommendations in the Young Adult section. The library staff also occasionally collects recommendations from other patrons.

According to Mindy Haworth, branch manager of the library, “We have a significant population in this county and the city who don’t have internet or computers.”

These residents rely on the library. To help meet this need, the library has Chromebooks and hotspots available to check out for free. Haworth shared one story of a family who was working to get back on their feet. “She was applying for jobs. One of the jobs was remote and online. She was able to get the job because of the hotspot.”

Haworth continued, “I would love for people’s eyes to be opened to how much the community relies on this space for things other than literacy. Literacy is our main goal, to make sure we have an informed society with access to information, but an offshoot is community engagement.”

Dade’s library is one of four regional libraries in the Cherokee Regional Library System, but the other three libraries are quite a drive for most residents. Haworth added, “Because of our geographic location, it’s the only place some people can go. They would have to drive all the way to Fort Oglethorpe or Lafayette to access some of the things we can provide.”

Haworth reported, “We house 35,000 titles; there are 11 million titles in the PINES system. The courier picks up and drops off materials three times a week.” Recently, A/V materials were added to PINES circulation. “We don’t have the space to house a huge DVD/audiobook collection,” continued Haworth.

The library’s door count was 26,950 in 2022. On average 73 people entered the library each day. The library also welcomed 417 new patrons over the course of the year. 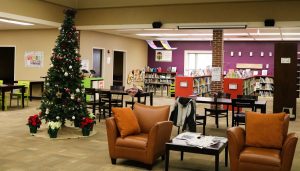 In addition to Haworth, the library is staffed by library assistants and a youth education coordinator. While the staff go above and beyond to assist patrons with any and all questions, the Dade County community makes the library what it is – a place of fun, learning, and community.

Volunteers and local groups/organizations often utilize the library space for programs such as Yoga for Seniors, Quilting & Sewing, and the Manga Club for teens. While the Sentinel was interviewing Haworth, people of all ages entered the library and visited numerous sections of the library.

Patrons can request titles they would like to see added to the library. Not every title will be purchased, especially if it can be requested through the PINES system, but Haworth takes patrons’ interests into account when ordering new materials.

This year, over 1,000 items were added to the library. Haworth explained, “We order books every month. Chelsea Kovalevskiy (assistant director of the regional system) runs through all the books we order to make sure it fits with our developing collection.”

Along with adding to the collection, clearing out old materials is also part of the librarian’s and Haworth’s jobs – a process called “weeding.” When Haworth first began working at the library, the collection had not been weeding in a long while.

“We’re considered a new book library, not an archival library,” says Haworth. She pays attention to overlapping topics and which materials are checked out regularly. “For example, if I have 20 quilting books, and ten of them haven’t circulated in five years, I’ll keep the other ten that have circulated.”

She continued, “We weed something unless it has a special characteristic, like it’s a classic. Often, there are more recent and more accurate materials.” Through a Sustainable Shelves Recycling Program, weeded items can provide the library with credit for more books or can recycle the old books.

While the library cannot raise money or levy taxes because it is a government non-profit, the 501(c)(3) branch “Friends of the Library” can sell the old books.

Everything the library offers is free to the public, aside from occasional supplies for programs or consumables such as print jobs. Haworth explained, “We operate on a very small budget. The only state funding we get is for books. We’ve gotten some grants [for computers], but our entire operating budget comes from local funding.”

Haworth is an advocate for the no fines Play Cards which are automatically given to every student in Dade County schools, eliminating the extra step of parents signing children up for library cards. Parents have the option to opt out of the program if they choose, but it is intended to make library access easier for families. “The most underserved kids, they don’t get access,” said Haworth. “We feel that the Play Card is a leveling field.”

Because they are non-physical cards, Play Cards can’t be lost. Haworth says, “They don’t have to keep up with anything. They just come in and we look them up.” Play Cards do not incur fines unless an item is damaged or lost.

The library’s Ready-to-Read program is another step to help promote literacy. The Thursday morning story hour for young children is intended to be fun. According to Haworth, “We don’t care if they move around. The whole purpose of the Ready-to-Read program is to show kids that the library is a fun place, reading is just stories, to make them enjoy the experience, not a confining experience.” 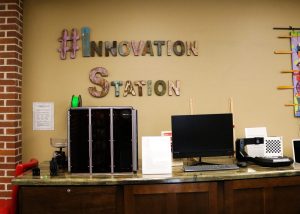 Photo by Lydia Berglar – Any patron wishing to create with the 3D printer is able to do so with assistance from the library staff and for a small fee to cover supplies.

Both digital and print resources have helped patrons who are starting or running small businesses. Haworth reported, “We have a patron who is getting certified to do medical coding. He’s been checking out books through the PINES system so he’s prepared to take these tests. There are also two men in their early 20s starting an LLC, and they came here to fill out and fax forms.”

While the Sentinel visited the library, a patron gave Haworth an update on his project to start a motorized mountain bike program. He has been using the library to research and begin the business, and Haworth has followed along with his story.

Other library resources include a 3D printer, the local history room, a sound-proof recording studio, study rooms, a large meeting room, a large format scanner, a poster printer, and a photo printer. One of the most important resources are the staff who answer all questions or point patrons in the right direction.