Rosie Mae’s Alpaca Farm is one recent addition to Wildwood, Ga. The business is a fulfillment of Max and Maegan Lewis’ dreams, but their eldest daughter, Rosalie Mae, also played a significant part in the journey. 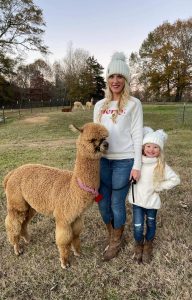 Photo courtesy of Rosie Mae’s Alpaca Farm – Maegan and Rosie pose with one of the alpacas.

Several years ago, the Lewis family visited an alpaca farm in Trion, Ga. for a “Christmas with Alpacas” event. Rosie fell in love with the animals. Maegan enjoys decorating and had dreams of running a boutique, and Max explained, “My life goal ever since I was a kid was wanting to have a farm and be able to work on the farm and eat lunch and dinner with my family, being here for them.”

Max currently works at the Tennessee Valley Authority four days out of the week, and the store/coffee shop is open Thursdays through Sundays. “TVA is a great job,” he said, “but being with my family is more important.”

These passions came together in the form of an alpaca farm, store, and coffee bar. After several years of purchasing and breeding alpacas, learning about coffee, and building the store, the family held the grand opening on Nov. 4 of this year.

The Lewises knew nothing about raising alpacas before this endeavor, but they learned from other farmers and experts. Max said, “We bought our first alpacas from Foster’s Trail & Alpaca Farm in Cleveland. They’re amazing people, and they helped us learn a lot.”

The family started with three alpacas and began going to alpaca shows where the fur is judged by fiber length and quality. They saved up to buy Vanna, an alpaca who formed an instant bond with Rosie. Then, their first baby alpacas were born on the farm. Max explained, “The plan is to have as many breeding-aged females as our land can support.”

While the alpaca numbers are growing, so is the Lewis family. Max and Maegan welcomed their second daughter, Sparrow, at the end of November.

The store currently sells alpaca products from Peru, North Carolina, and other nearby alpaca farms. The Lewises are saving up fibers from their alpacas to eventually have processed, spun into yarn, and made into products. They shear the alpacas each spring.

Photo courtesy of Rosie Mae’s Alpaca Farm – The store sells clothes and stuffed animals made from alpaca fur, but it also sells decor, books, and other gift-appropriate items.

From the alpaca enclosures to the store to the coffee bar, Rosie Mae’s feels warm and relaxed. “That’s what we wanted,” says Max, “a really homey, general store type vibe. Maegan’s vision is that if you’ve got a party, wedding shower, or baby shower to go to, you can swing by this local store and find something unique.”

He continued, “She’s the boutique side of it, and I just love coffee.” He buys beans from Mean Mug Coffee Roasters in Chattanooga and credits Mean Mug’s owners for helping him in this endeavor.

Max explained, “I’ve always been intrigued by different stuff, and Maegan is a determined woman with all these ideas. She’s not a risky person, but I know if I put my mind to a good idea, and we’ve done our research, we’ll make it work. We’ve never owned a business before and I’ve never worked in a coffee shop before, but other people do it all the time, so I know it’s possible. It’s finding those people and picking their brains, like Matt from Mean Mug and our friends at the farm in Cleveland.” 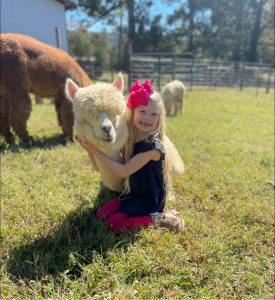 Six-year-old Rosie enthusiastically helps with the farm. “She’s the boss,” says Max. “If you ask her, this is her farm. She is the biggest help. She helped me do the plumbing for the store. Every little aspect of building this building, she had a hand in. She’ll scoop the alpacas’ poop. When she was younger, we didn’t let her, and she was upset because she wanted to do it.”

Maegan’s family owned the Wildwood property on Old Birmingham Highway for many years, and the couple bought it in 2016. Their home is adjacent to the farm and store. “This stretch of land, this side of Wildwood, is some of the prettiest land,” said Max. “We’re trying to keep it that way.”

The grand opening was intentionally planned as the weather got colder and people began thinking about Christmas gifts. “We opened before Christmas because people think of the products as cold weather products,” said Max, “but I wear alpaca socks year round and I work outside. They wick moisture, they don’t get sweaty, and they keep you cool. But most of the profit we’ll make will be in the winter.”

Max and Maegan’s appreciation of the animals is apparent from talking with them. “It’s just a niche thing,” reflects Max. “There’s something about them, and we want to share that with everybody. They have a calming effect. They’re used in therapy a lot.”

Alpacas were a perfect fit for the Lewis family because they are hypoallergenic. “Rosie loves all animals really, but Maegan is allergic to all animals except alpacas. When we first went to the farm in Trion, she stayed away from them. Then we went to the farm up in Cleveland, and she got closer to them and being around Rosie after she loved up all over them, Maegan didn’t have an allergic reaction. We finally figured out she wasn’t allergic to them because they don’t have lanolin or dander.”

Similar to llamas, alpacas usually weigh under 200 pounds. Llamas are several hundred pounds larger. “They’re all in the camelid family,” explains Max, “but alpacas are usually more gentle. Llamas will spit, but we’ve never had an alpaca spit on someone.” 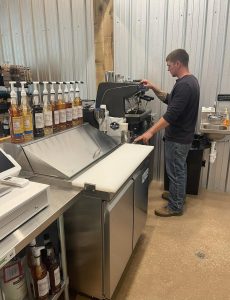 Photo courtesy of Rosie Mae’s Alpaca Farm – Max studied coffee and practiced until he could make a quality cup for the coffee bar portion of the store.

The family is thankful for support from other local businesses. “Local Airbnbs and the Groovy Nomad have been supportive, and so have Wayne Bice and Greta Lindsay who are both opening up venues in Wildwood.”

Max and Maegan plan to get creative with other ways to use the farm. Some ideas include renting the space for childrens’ birthday parties, hosting date night events, kid’s night events, and having picnics with alpacas. “The alpacas like to get out and mingle with all the people,” they said.