Harry Abell, a volunteer with the Tri-State Food Pantry, was discouraged that the Lookout Mountain group was unable to distribute food in October because they did not have volunteers who could lift the boxes. 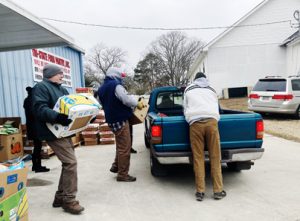 She notes that the pantry was started by Sand Mountain United Methodist about 30 years ago. “We’re not running short on food, and we can get the food packed.” It’s the West Brow location that lacks consistent volunteers.

The food pantry is now a USDA agency. According to Powell, “We follow government guidelines about who we give the food to in terms of income and residency. Being a federal agency gives us access to a variety of healthy foods.”

In addition to the federal support through Atlanta Community Food Bank, Powell notes, “We also receive support from United Way of Greater Chattanooga and a number of churches from a variety of denominations.”

According to Abell, “The problem is that most of the volunteers are in their 70s or older. Many of us aren’t able to lift 40-pound boxes.”

Part of the issue is that many younger, able-bodied people are working during the day on Friday. Abell says, “We thought about moving it to Saturday, but then you’ve got young families who are doing stuff with their kids.” He hopes that some local businesses will consider letting employees volunteer for an hour.

Abell reports, “We need about four or five volunteers per month. We’ve loaded it in less than 45 minutes before, and unloading could be done in the same amount of time.”

Abell’s dream is to have a regular schedule, perhaps with a quarterly rotation, so that there will be no uncertainty about whether or not they’re able to distribute food. “I’d like to see volunteers, hopefully men between 20 and 50 years old, who could do it on a regular basis.”

Abell notes that Southeastern Lineman Training Center has helped before, and he’s also reached out to Covenant College. Some athletics programs at the college have expressed interest in volunteering. “I’ll keep pursuing that,” he says. 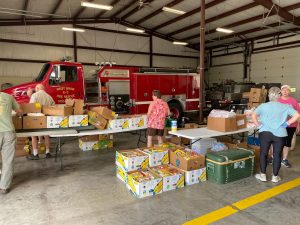 Volunteers unload boxes at the Lookout Mountain location where strong volunteers are needed.

He is also thankful that the local U-Haul regional manager has partnered with them to transport the food. “He has been quite helpful to us, allowing us to rent the U-Haul at a reduced cost.”

Powell and Abell both noted the quality of the food and the impact it has on those in need. Abell reports, “We have plenty of food, and it’s good, nutritious food with a lot of variety.”

Powell reports that the monthly boxes help those who are managing tight budgets. “The people who qualify live on a very low income. We have a lot of repeat clients who know that the monthly food box helps them manage their budget. We also have people who come occasionally when they have an unexpected bill or something like a car repair come up.”

Powell notes that many senior citizens, those with disabilities, and some households with young children utilize the program.

Because of its proximity to Alabama, the food pantry occasionally has requests for help from Alabama residents. Powell reports that because the federal system operates by state, Alabama residents must go through the Flat Rock Community Food Bank. “It’s about 15 miles from us, and it serves Flat Rock, Ider, Higdon, and Bryant areas.”

To learn about other food and aid available for Alabama residents and Dade County residents alike, read the Sentinel’s companion article in this edition, “Organizations, Churches, and Volunteers Work to Meet Needs in Local Community.”