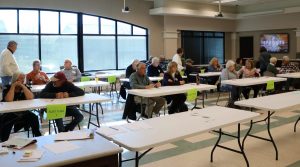 Photo by Lydia Berglar – Auditors await the start of the audit on the morning of Nov. 17.

At 9 a.m. on Nov. 17, the Dade County Board of Elections began a risk-limiting audit of the Nov. 8, 2022 General/Special Election. The audit will continue until completed.

The audit is being held in the Dade County Commission Meeting Room at 71 Case Avenue (the county administrative building).

In recent years, stirred by the 2016 and 2020 presidential elections, news sources across the country have noted the decline of the public’s trust in election outcomes. Many organizations – including those who align with the right, the left, and those who claim to be non-partisan – promote election audits as a way to confirm the accuracy of election results.

According to the Brennan Center for Justice, “In a risk-limiting audit, considered the gold standard of post-election audits, election officials hand count a sample of paper ballots to provide strong evidence that the reported election-night result was correct. These audits, which can only be carried out when there’s a voter-verifiable paper record of each vote, are typically conducted publicly and can provide voters with confidence that a counting error or malicious attack did not change the outcome.”

The Brennan Center describes itself as “a nonpartisan law and policy institute. We strive to uphold the values of democracy. We stand for equal justice and the rule of law. We work to craft and advance reforms that will make American democracy work, for all.”

According to Verified Voting, “In addition to confirming outcomes and detecting errors (whether accidental or intentional), good tabulation audits can deter hacking, malware, and fraud and help foster continuous improvement in elections administration.”

Verified Voting says of itself, “Our collective technical knowledge has been foundational in understanding where vulnerabilities lie in our elections and in promoting policies and best practices that mitigate risks…We work with election officials, policymakers, and democracy defenders across party lines to help voters vote and to promote policies that support justified public confidence in elections.”

The U.S Election Assistance Commision (EAC) notes, “Interest in post-election audits has risen amongst the public, researchers, and policymakers in recent years. In 2021, state lawmakers have introduced over 68 post-election audit bills in 29 states.”

According to EAC’s website, “The U.S. Election Assistance Commission (EAC) was established by the Help America Vote Act of 2002 (HAVA). The EAC is an independent, bipartisan commission charged with developing guidance to meet HAVA requirements, adopting voluntary voting system guidelines, and serving as a national clearinghouse of information on election administration.”