On Monday, Oct. 24, Congresswoman Majorie Taylor Greene, the representative for Georgia’s 14th district, visited our county. Greene had lunch with County Commissioner Monda Wooten and Sheriff Ray Cross. “We had a tour of the jail, met the staff, and discussed fentanyl which is of course a major issue,” Greene said. “It’s an issue in every county though; it’s not just Dade County.”

Before ending the day with a GOP meeting held at the Trenton Civic Center, Greene talked with the Dade County Sentinel.

When asked what she has learned about the people of Dade County and our concerns, Greene responded, “Inflation. I think that’s the number one issue right now. Inflation is hovering around 8-9%, but when you look at different commodities such as groceries, it’s a much higher percentage. Especially with senior citizens and people who are on a fixed income, inflation has driven them to a point where some are making difficult decisions between being able to pay their rent or buy groceries.” 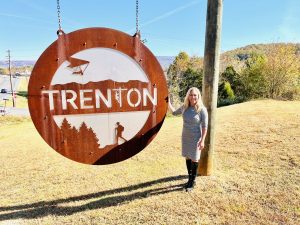 Congresswoman Marjorie Taylor Greene spent the day getting to know Dade County, meeting with officials, and talking with constituents.

Greene expressed appreciation for Dade County, noting our low crime rates. “Dade County is so wonderful. Crime is not really an issue here like it is in major cities, like Atlanta, but fentanyl is the big problem.”

According to Greene, one challenge that faces the 14th district of Georgia is the need for economic growth. “We need growth. We need businesses to move here, so that’s something that we’re always wanting to happen, but the energy cost is a driver and inflation still makes it difficult.”

When asked what progress has been made in Congress, Greene noted that Congress is currently under Democrat control. “Nancy Pelosi is the one who chooses which bills we’re allowed to vote on. Republicans have no control of bringing bills to the house floor. Republicans don’t have control over any of the committees in Congress. What I’ve done is spent a lot of time on the house floor, asking for recorded votes.”

Greene believes that recorded votes are important because this allows for transparency. “It stops a bill from being passed by voice (which is just 3 to 5 Democrats or Republicans in the house chamber simply voicing their vote). A recorded vote means that all 435 members of Congress have to vote, and we’re on record. That shows our entire district my voting record, but it also shows the entire country all of our voting records. Whether you’re Republican or Democrat, I think the American people deserve to see how members of Congress vote on all bills.”

“It’s not a judgment on people’s sexuality,” Greene explained. “It’s not saying what adults can or can’t do with their bodies, but when it comes to kids who can’t even legally get a tattoo, vote, buy tobacco, or join the military, and most of them haven’t even gotten their driver’s license or graduated from high school yet, it should be a felony to do this. Introducing such strong legislation on this issue has driven it to a more national level and we’re seeing a lot more people be outspoken about it. Matt Walsh has really gotten involved. The wife of the country singer Jason Aldean has been very vocal [about it].” 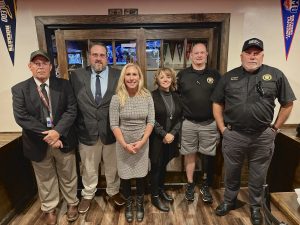 Regarding her 21st Century FREE Speech Act, Greene noted that it’s been difficult to move forward with the bill because of Democrat control. “There is a senate companion bill,” she said. “Senator Haggerty in Tennessee has the senate companion bill, and I have the house bill. They’re exactly the same. We are working hard to make progress there.”

Greene has also introduced the Protect America First Act. “It reinstates President Trump’s strong border policies. It would fully fund finishing the wall, but also making repairs. There are a lot of issues now because Joe Biden pulled all of the funding from the wall so a lot of the gates are stuck all the way open or they’re stuck shut.”

“We’ve had approximately five million people come into the United States of America – that includes all border numbers, not just the southern border – since Biden became president. My bill would put a four-year moratorium in place on immigration, which sounds very strong, but we have so many overwhelming asylum and immigration cases that we need time to work through those as well as deport criminal, illegal aliens out of the country.”

If reelected, Greene will focus on passing a budget. She has a conservative view of what the 118th Congress will be able to accomplish, noting, “With a Democrat-controlled White House, we know that we can’t get any sweeping legislation signed into law. Probably the only thing that we can get passed is a budget, which is really important. I would like to see a lot of the wasteful spending cut from the budget. One of the first things we’re going to do is to completely defund the 87,000 IRS agents that Joe Biden wanted and Democrats passed. In the budget, we can do things like repeal the vaccine mandates and stop funding any type of program that’s harmful.”

Greene also discussed her views on funding the war in Ukraine. “[Passing the budget would mean] no more funding for the war in Ukraine. We have compassion for the Ukrainian people, and we’re not supporting Russia or Putin, but we don’t believe that the United States needs to be engaged in a war with nuclear Russia. They need to reach a peace agreement, and if the U.S. stops funding the war, there’ll be a big incentive for them to reach a peace agreement.”

She also plans to serve on the oversight committee, stating, “We’ll be launching investigations into a lot of abuse and corruption. We want to look into many of the agencies, the CDC being one of them. We’ll definitely be investigating Hunter Biden and his laptop. Most people will never have a Suspicious Activity Report, but Hunter Biden, Joe Biden, and his sister have had over 150 reports.”

When asked about COVID-19-related legislation and how we ought to move forward, Greene responded, “I think the government needs to step out of the way and get out of the COVID business. We know now that [COVID-19 has] over a 99% survival rate, so we don’t need to be paying people to stay home. We should never shut down our economy again because of COVID. [The federal government has] funded and mandated a vaccine that, in my opinion, the FDA should not have approved. On the federal level, the CDC has put the COVID-19 vaccine on the schedule for childhood immunizations starting at six months.”

Greene explained the difference betweening mandating vaccines and allowing people to choose. “I’m definitely for people being able to choose. The COVID vaccine is available. It’s been a long enough time, and if people are concerned about COVID, they can get vaccinated, especially if they’re predisposed or have health conditions that could cause complications. We shouldn’t force vaccines, and we need to let people make their own decisions.”

When asked what she would say to Georgia voters, Greene responded, “Voters in general need to stop voting for political parties the same way they cheer for football teams. Politics and sports are completely different. Voters need to look at the policies, results, and candidates based on the things they’re talking about. Democrats are still basically hinging their elections on attacking President Trump, talking about January 6, and talking about green energy and passing the Green New Deal.”

Meanwhile, “We have over $31 trillion in debt, inflation is crippling people and crushing small businesses, and while crime is not a major issue in our district, nationwide crime is out of control. Also, it’s unforgivable what’s happening down at the border. There are so many migrant deaths, human trafficking, and drug trafficking that shouldn’t be happening.”

Specifically regarding Georgia, Greene said, “Governor Kemp has done a great job. We were the first state to open back up after COVID shutdowns, which everyone I know in businesses is thankful for. Kemp brought in the National Guard to stop the riots in Atlanta. Raphael Warnock has voted nearly 100% of the time with Joe Biden, and we are living and suffering under the results. I think Georgia voters will make up their minds.”

“Most importantly,” she said, “vote.”