At the Oct. 24 Board of Education meeting, Superintendent Josh Ingle noted several awards and recognitions, each department gave reports on successful projects (with highlights being CTAE and NASA Hunch projects), and this was also Chris Green’s last meeting with the board before retiring.

Ingle noted that the Dade County Board of Education was named a 2022 Georgia School Boards Association (GSDA) Exemplary Board.

Regarding Page, Tracy Blevins said, “It’s my privilege to work with Justin everyday. I had the honor of serving as his home room teacher…He’s a great educator, and he’s a natural.”

Page said, “I’m thankful for the opportunity to be home. This is my alma mater. It’s great to make a difference in kids’ lives.”

Of Rogers, Brent Cooper said, “It excites me to see somebody get rewarded when you see behind-the-scenes how much work they put in. Molly’s always the last one at school, working in her classroom or in the cafeteria working with cheerleaders…We really appreciate her.”

Rogers said, “It’s such an honor to be an educator in a community that poured so much into me and to have the opportunity to give that back…I’m following in some very big footsteps.”

Tonya Gatlin reported on Career, Technical, and Agricultural Education (CTAE) and workplace learning, noting that the student enrollment in each career pathway is comparable to that of the last few years. The welding pathway, offering only two courses, is entirely full. Gatlin reported that they are rebuilding several programs and looking at data to decide if they should offer other pathways.

Additionally, by submitting a grant to the Georgia Department of Education, the CTAE program received about $19,000 for the mechatronics pathway.

Gatlin also highlighted that teachers voluntarily spent 200+ hours in professional development workshops and several completed 16 hours of “externships” with local businesses so they could bring topics back to the classroom and build connections for student internships. The school also brought in 17 industry guest speakers who presented to students.

Gatlin highlighted many learning projects in each CTAE pathway, including:

Gatlin explained, “With work-based learning, we do track students. It is hard to track some students. We had about 30% go to college and finish a degree in the last four years. I couldn’t get the two year data. We’re trying to figure out post-secondary, how many of our students go, how many survive within the first and second year.”

In Susan Reyes’ Pre-K update, she noted that Davis Elementary has one class that is fully enrolled with 22 students, and Dade Elementary has five classes with 85 enrolled. She highlighted that these programs are fully funded by the Georgia Lottery.

In Patti Johnson’s academics/testing report, she gave an update on the 2023 Cognia Review, noting that all materials for accreditation approval will be submitted by March 21 to the accreditation evaluators. Additionally, she highlighted student-led conferences which encourage students to take ownership of their education and also encourages parent participation.

Jeremy Roerdink reported on federal programs and safety, noting that Title I meetings, which are required by federal law, have been held at both elementary schools. He noted the success of several scenario drills, such as active shooter training.

“We have a great law enforcement. They’re very active, very involved,” Roerdink said. “The threat is usually neutralized in these training scenarios within four to five minutes…Seconds matter, and we’ve communicated that.”

Additionally, Roerdink reported on the substitute teacher training in October, which had 25 participants. “We are in dire need of subs,” he said. “I know as a principal…usually you walk in first thing in the morning and it’s, ‘Where do I need coverage?’and you try to find that coverage.” 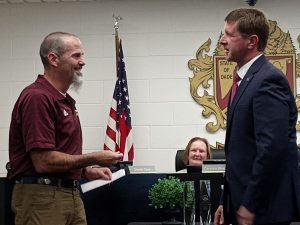 Chris Green, director of information technology & network services, was recognized at his final board meeting before retirement.

Chris Green gave a report on technology updates and projects. As he is retiring in the near future from the role of director of information technology & network services, this was his final board meeting. The board thanked him for his service, with Ingle noting that Green was always happy to help and ready to address issues quickly anytime Ingle called.

She also reported that the Dade County Middle School gym project was paid in full as of Sept. 20, 2022.

The next school board meeting will be Nov. 13 at 5 PM.