The Oct. 17 Trenton City Board of Commissioners meeting focused largely on a presentation about cutting down school zone speeding using a company called Blue Line Solutions.

“We want to slow people down,” he said. He noted his personal experience with school zone speeding, saying, “I was run over by a car in 1996 in a school zone when directing traffic.”

The company installs LIDAR equipment (an acronym for light imaging, detection, and ranging) instead of radar technology to detect speeding vehicles. They have tracked results in other cities, finding that speeding is cut down by about 90 percent using their system. 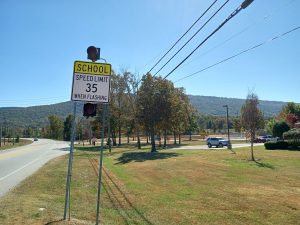 When cities choose to use Blue Line Solutions, they then inform the public and initiate a 30-day period of warning citations before full enforcement.

Citations are $100 for a first offense and $150 for a second offense. Thirty–five percent of ticket revenue goes to Blue Line Solutions and 65 pecent goes to the city.

Blue Line Solutions installs the equipment free of cost to the city, asking for a two-year commitment. Moore said, “It’s totally free. The only thing is if we can’t use solar and there’s electric equipment needed, they say it’s about the cost of a streetlight. You’d be responsible for paying for the electricity.”

The enforcement period is only when school is in session at the start and end of the school day. The commissioners noted that there is no school zone speed limit during football games and other sporting events, even though the high school is a highly trafficked area during those events.

If the city chooses to use Blue Line Solutions, the earliest the equipment could be installed is by spring 2023. Moore noted that it would likely take longer due to GDOT (Georgia Department of Transportation).

Norris said, “It’s another safety feature we can initiate in our school system without having to spend any money.”

Mayor Alex Case noted, “We’re all guilty of running over. I catch myself all the time.”

After the presentation, each commissioner gave an update, and Commissioner Monda Wooten and Mayor Case proposed the use of SPLOST funds for two projects.

Wooten requested $1,500 to $2,000 to buy more Christmas light decorations, adding to the existing city Christmas lights. Case noted that three price quotes must be presented for the use of funds to be considered.

In Commissioner Terry Powell’s parks and recreation update, he noted the completion of the Jenkin’s Park mural. Jennifer Blair, who coordinated the project, thanked the city and expressed her delight in working on the project and the final results.

Commissioner Wooten noted the success of the new weekly brush pick up on Thursdays. Previously, citizens called to schedule a time for pick up. Additionally, a Gator utility vehicle was purchased and received by the city.

Mindy Howard, the library manager, reported the hiring of Samantha Ward for the youth education coordinator position. “We are still looking for our lead circulation library assistant,” Howard noted. She discussed the two days that the internet was down at the library, due to issues with the IP address and the telephone company. “We realize that for a lot of people, we are the only resource that provides [internet and computer services].”

Jane Dixon with the Alliance for Dade gave a report on the Job Ready event held Sept. 24. She noted that several people were hired on the spot that day. She announced “Fright Night” which is tonight, Oct. 26, at Southeastern Lineman Training Center during which three local business owners will share about challenging, “frightening” times in their career and how they faced them. The speakers are Nathan Wooten, Nadine Woods, and Brad Gibson.

Dixon noted that Keely Farmer will be painting the windows of participating local businesses for Light Up Trenton. The Alliance for Dade is also excited to welcome Margo McDade, the new director of tourism, and Sandy White as president and CEO.