The Dade County Pet Project will present a film, “Free Puppies” this Saturday at the Dade High School Auditorium that will focus on animal over-population featuring the Dade County area. Three years of hard work went into the making of the film. 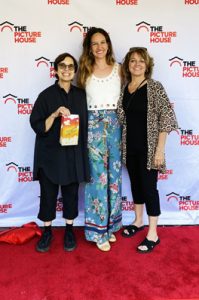 Film Editor Muffie Meyer, center, who is creditedm with two Emmys and a Peabody Award is shown at the premiere of the film “Free Puppies” in New York. The film will be shown at the Dade High School Auditorium Saturday. Also shown are Samantha Wishman, left, a Columbia University graduate in film and is the producer of the film that was filmed mostly in Dade County and Dade County resident Monda Wooten, who is one of the ladies featured in the film.

Monda Wooten had a friend in New York that knew someone, Muffie Meyer, that wanted to make a film on animal rescue. Meyer is an American director that makes documentaries, theatrical features, and children’s films. She has won two Emmys, a Peabody Award and numerous other recognitions. Her work has played in Japan, Greece, London, Edinburgh, Cannes, Toronto, Chicago and New York.

“She had adopted a dog that we had sent up there on a transport and she was very interested in where the dog had come from – how the process worked,” Monda Wooten said. “My friend contacted me and asked me if I would be willing to talk with her.” Monda said that she would, and Meyer wanted to make a documentary on it. She came down to Trenton several times for about three years and Monda introduced her to a bunch of other people that rescued animals.

“Because all of us do things a little bit different,” she added.

Meyer followed them and did her own story, and she went on a transport up north and rode the bus with a bunch of dogs. Meyer also went on a hoarding situation with the local group and that is how the film came about.

Monda said that they did a “lovely job with the film.”

The film has been reviewed by The New York Times, The Washington Post and Rotten Tomatoes – it’s actually playing in theaters.

“It is really a big deal, it was not a little presentation,” Monda added.

She and her group came down to Dade County a lot and followed the local group as they went about their work of rescuing dogs.

Monda said the film was really a good little film and there was no money involved in the thing. 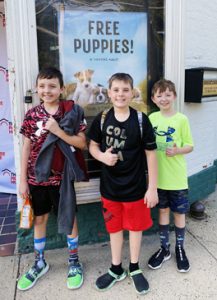 The grandchildren of Monda Wooten also attended the premiere of the movie in New York. They were also shown in the film. They are Lincoln Barajas, Scott Endicott and Harrison Barajas.

“They would do anything they could to help us because they saw the need to stop the overpopulation of pets in the south,” Monda explained, “and that’s what the movie focuses on and the different things that people are doing to combat that problem. It was their way to give back for letting them follow us and dealing with them for so long.”

All the proceeds from the showing of the film go to the Dade County Pet Project, a 501c3 that spays and neuters pets in the area for people that cannot afford it.

“We subsidize, we have low cost spay and neuter transport four times a month and it offers people the opportunity to get their pets spayed at a low cost.”

The showing of the film is $7 to the public or three for $20. Doors open at 5:30 p.m. There will be a silent auction and refreshments before the film begin at 7 p.m.