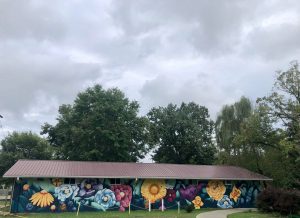 The mural at Jenkins Park has been completed. It was painted by Chattanooga artist Joy Taylor, and was made possible due to the support and donations of the local community.

The floral themed mural in Jenkins Park, painted by Chattanooga artist Joy Taylor, and coordinated by citizen Jennifer Blair, has been completed.

“I’ve been dreaming of a mural (many murals) in Trenton for years, and especially since the (re)formation of TriState Heritage Arts and Culture Coalition. I settled on the city park as an ideal location because it is already a communal area which belongs to us all, and also because of the construction of Town Creek Trail which began there,” Blair said.

Joint permission was granted by the American Legion Post 106 and the City of Trenton along with support from the Industrial Development Authority, ArtsBuild, Scenic Dade, and several local businesses. A design was proposed by Taylor, which aided in the promotion of the project.

Over $10,000 was raised thanks to the generosity of the Lyndhurst Foundation, the Bobby Stone Foundation, and the Lookout River Foundation, as well as local businesses and community members.

“I am beyond thankful for every single person who believed in and supported this idea, and for those who have voiced praise and appreciation for it,” Blair said.

Heidi Wilson, a Dade County artist, is working on postcard souvenirs of the project, which will be sent to those who contributed toward the mural as a token of gratitude.

“Working on the mural was delightful! As it got closer to completion, people who’d visited in the beginning checked back in on the progress. It was great to get to see their reactions. I really enjoyed how engaged the community was with their park and town. It was such a pleasure to work with Jenn and Arts Build. I’m really grateful to have been able to paint this big fun floral art,” Taylor said.

Now that the mural is completed, Blair said that she feels, “elation, gratitude, satisfaction, relief.”

“It pleases me to see it. Every time. Dade County is a special place. I want both residents and visitors to feel that distinction and be able to point to visible representations of it,” Blair said.

Blair hopes to see many more pieces of artwork in the city and county to come.

“In truth, I have more ideas than time to pursue them. There are many places and spaces, which, in my opinion, would make excellent venues or canvases for public artwork. If a property owner is interested in collaborating, I encourage them to connect with the local Arts and Culture Coalition,” Blair said.