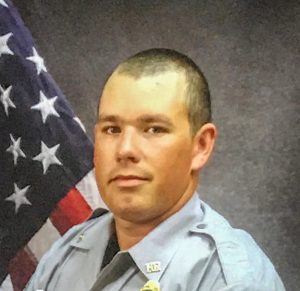 “I was very fortunate to have parents and grandparents that kept me outside, in the woods, out on the water. I was always fishing, I always loved to hunt. I was always riding on 4-wheelers, too. I have always been interested in all of that,” Stevens said.

According to Stevens, there was one time when he was fishing on the Tennessee River with his family as a kid, and they were checked by a game warden. Right then and there, he thought that would be a cool job to have.

“It has always been what I’ve wanted to do. When I was growing up, I got to know Jeff Galloway (now retired game warden after 33 years of service). He taught my hunter education course. He mentored me and he steered me in the right direction. He was always available for advice,” Stevens said.

Stevens went to Dalton State College where he got an associate degree, and then he recently received a bachelor’s degree in criminal justice from Thomas University.

When he first became a game warden, he started out in Sumter County, in southwest Georgia. He was there for three years.

“I worked with some of the best game wardens in the state and got a lot of experience. There is a lot of hunting and fishing down there, there is more of a variety, like alligators and stuff like that. I was very blessed to be there and learn the job,” Stevens said.

Stevens continued, “The experience I gained from being down south has greatly helped here in Dade County. It gets interesting at times because I run across people I know.”

Stevens’ primary responsibilities as game warden are focusing on and upholding game, fish, and boating related laws. The Department of Natural Resources is also an assisting agency.

“We helped with the recent flooding in Summerville. We were able to help the Chattooga County Sheriff’s Office distribute water to the community,” Stevens said.

Stevens encourages the community to look up the Georgia state regulations any time before they go hunting or fishing. That information can be found online at gooutdoorsgeorgia.com. Stevens is also able to hand out regulation books to anyone who would like a copy.

Stevens can be reached by calling Dade County Emergency at (706) 657-4111, or the Department of Natural Resources regional office in Acworth at (770) 529-2424. Stevens said he is always available to answer questions.

“To do my job efficiently and effectively, we rely on the public. There is only one of us per county and that is a good bit of area to cover. We rely on complaints and tips a lot. Please reach out,” Stevens said.