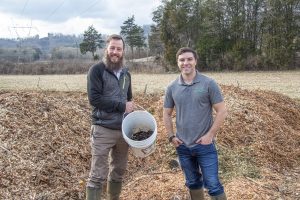 REBECCA HAZEN/Dade County Sentinel
Michael Ryan and Normand Lavoie, owners of NewTerra Compost, are finalists for the Tennessee Valley Federal Credit Union (TVFCU) fifth annual Idea Leap Grant contest. They will participate in a pitch competition on Oct. 18. The winner will be awarded the grand prize of $50,000, first place will win $20,000, and the three runner ups will receive $10,000.

These entrepreneurs will participate in a pitch competition as they strive to win one of five grants to support and expand their small business – grand prize: $50,000, first place: $20,000, and three runners-up: $10,000.

“We want to thank all of you who took the time and voted for us in the TVFCU Idea Leap Grant competition. Although we didn’t win the People’s Choice Award we did make it to the top 5 and will be in the running for the $50,000 prize! We could not have made it this far without all of you and your support,” Ryan and Lavoie said.

They noted that if they win, they plan to use the money to upgrade our compost site.

“Right now, all of our finished compost, and team members, are exposed to the elements at all times. This money would allow us to build a structure to store finished compost, equipment, and hopefully a small office with a restroom,” they said.

They continued, “We started this company with the mission of keeping organic material out of the landfill. So far, our members have diverted over 800,000 pounds of organic material.”

This year, nearly 150 small businesses applied for the competition. This was reduced to 23 quarterfinalists, then, after the quarterfinalists submitted videos and hosted site visits, 10 semifinalists were selected.

For the final stage of this year’s Idea Leap Grant contest, TVFCU will host a pitch competition on Oct. 18 at the Bessie Smith Cultural Center. At this event, each finalist will pitch their business to the judges who will award the five grants.

Each business owner will take the stage and explain how they plan to use the grant funding, the impact they have on the local community and how they plan to improve and expand their business in the coming years.

“We’re making the fifth annual Idea Leap Grant competition bigger than the program has ever been before,” said Tommy Nix, vice president of business and commercial services. “We hope that many community members join us on Oct. 18 for the pitch competition, a reception hosted by our friends at Chambliss Startup Group and an educational luncheon.”

New this year, TVFCU is hosting the first-ever Idea Leap Luncheon at the Bessie Smith Cultural Center on Tuesday, Oct. 18 at 11:30 a.m. The luncheon will feature a panel of successful local entrepreneurs discussing their experiences as small business owners.

At the pitch competition, starting at 6:15 p.m. after the Chambliss Startup Social, the five Idea Leap finalists will present their businesses. The event will also feature a special guest keynote speaker to be announced soon.

The Idea Leap Grant is an extension of the credit union’s Idea Leap Loan Initiative that was created specifically for small businesses in 2016. To date, TVFCU has funded more than $4 million in loans to emerging and early-stage businesses through the loan initiative. Furthermore, TVFCU has awarded nearly $200,000 in Idea Leap Grants and scholarships.

For more information about the Idea Leap Grant, and to RSVP for the Oct. 18 events, please visit tvfcu.com/IdeaLeapGrant.