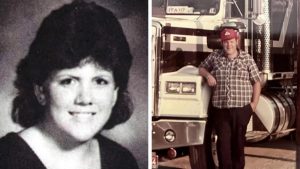 Stacey Lyn Chahorski, left, was killed by Henry Fredrick Wise, right, in 1988 in Dade County. Chahorski’s was buried in Dade County as Jane Doe. Genealogy DNA helped crack the cold case and identified both Chahorski, earlier this year, and Wise.

Chahorski was found dead in Dade County in 1988 and was buried in the county as Jane Doe. Chahorski was identified in March of 2022, and was found to be 19 years old at the time of her murder, and from Norton Shores, Mich.

According to Georgia Bureau of Investigation (GBI) Special Agent in Charge Joe Montgomery, the cold case had finally been solved due to advancements in genealogy DNA.

“We didn’t start using DNA until the late 90s. At this point, we had evidence that had not been submitted. In the mid 2000s, myself and another agent picked this case up. We had the DNA submitted, and had a profile developed. But the profile didn’t match anybody. So, we went to genealogy DNA, which gives us more leads to follow. Once we had a general idea that it was her, she was identified by her fingerprints,” Montgomery said during the March 2022 press conference.

On Friday, Dec. 16, 1988, two Georgia Department of Transportation workers found her body near I-59 northbound, about five miles from the Alabama state line.

Wise would have been 34 at the time of Chahorski’s murder in 1988. Wise was a truck driver, driving through Dade County on his regular route. In 1999, Wise was killed in a stunt car accident at Myrtle Beach Speedway in South Carolina and was burned to death.

Wise had a criminal history in Florida, Georgia, and North Carolina, ranging from theft, assault, to obstruction of a police officer. Wise’s arrests predate mandatory DNA testing after felony arrest.

GBI agents assigned to this investigation sought the FBI to assist with genealogy DNA. FBI used Othram, a lab specializing in this advanced testing, and received positive results on June 13, 2022.

“With all other options exhausted, funds were secured to use forensic genetic genealogy to generate some new leads in the case. Investigative genealogy is a relatively new process but has been used to help solve several cold cases throughout the country,” Keri Farley, Special Agent in Charge of the FBI’s Atlanta office.

Farley continued, “Investigators found what was believed to be the killer’s DNA at the scene, but for years it could not be linked to a person. Once the FBI became involved the DNA was traced back, which revealed that Wise had a living family member,” Farley said.

The GBI obtained DNA swabs for comparison to the profile created through genealogy DNA and identified Wise.

A message from Mary Beth Smith, Chahorski’s mother, was shared during the press conference.

Smith expressed gratitude to the FBI, GBI Special Agent Adam Jones for his relentless pursuit of the case, and GBI Forensic Artist Marla Lawson for her work on the composite drawing and clay rendering. She also thanked Dade County Sheriff Ray Cross, all the people in Dade County who took care of Chahorski as she was brought home to Norton Shores, Michigan, and the Norton Shores Police Department for never giving up on finding her.

“Our personnel in region one, they have solved four cold cases over the last four years. That dedication made it possible to give Stacey’s family the answers they’ve waited so long to get,” Register said.

“This case is key, because this is the first time that we know of that investigative genealogy was used to identify both the victim and the killer in the same case,” Farley said.

Your State Parks Day Is Sept. 24