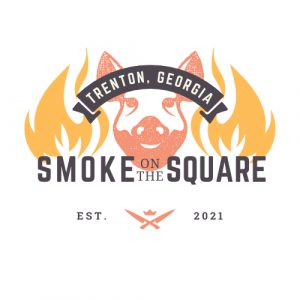 The second annual Smoke on the Square barbecue contest event will be Saturday, Sept. 10, from 10 a.m. to 4 p.m. at Trenton’s Veterans Memorial Park, located on the Courthouse Square.

Proceeds from the event will benefit A Hand UP Ministry, a faith-based ministry for people who have recently left the prison system. The event is being organized by Misty and Jason Rooks.

“It was Jason’s idea. He got really into watching BBQ Pitmasters on TV, and one day he said, ‘Let’s have a contest here to benefit A Hand Up,’ because he’s on the board. We quickly got it together last year to have something fun to do in Dade County and bring awareness. A lot of people still don’t know about A Hand UP,” Misty Rooks said.

In addition to the Rooks, there is also a Smoke on the Square Committee, consisting of members Anthony Jones, Seth Castleberry, Clark Shepherd, Joseph Chambers and Ronnie Hunt.

There are 20 barbecuing teams that have signed up for the contest. One of the teams is from Mississippi, but most of them are local.

The competition will be for three cuts of meat: ribs, pork, and chicken. The teams will present their finished meals to the judges at noon, 12:30 and 1 p.m.

Tina Cannon will be a celebrity judge for the event. Cannon was the winner of the 2018 World Food Fire and Ice Challenge. Cannon has competed in BBQ competitions across the Southeast since 2009, winning more than $75,000 and over 200 category wins. She has appeared in cooking competition shows on Travel Channel, Destination America, Netflix, and Food Network.

There will also be a People’s Choice Award. People can buy a plate of pulled pork samples for $10 and cast a vote for the best tasting barbecue.

The grand champion gets $1,000 and a custom-made cutting board with the Smoke on the Square logo. The winners in each of the divisions will get a payout from the entry fees, with 60 percent going to A Hand UP. The winners will be announced from 3 to 4 p.m.

There will be many other different kinds of entertainment. There will be Christian, country, and bluegrass music groups performing throughout the day. There are free inflatables and games for the kids, in addition to 28 local craft vendors. There will be Smoke on the Square t-shirts for sale. There will also be a Jeep car show, and Chattanooga’s J103 Christian radio station will broadcast live from the event, and they will have a prize wheel.

Items will be raffled off during the event, including a Pit Boss pellet grill, a Blackstone Grill, an Oklahoma Joe Bronco Smoker, a one-night stay at a Wander Chatt property, a $300 wagyu beef grill package, and Atlanta Braves tickets and parking pass. Tickets are $10 each or five for $40. A Hatsan Escort Df12 semi-automatic shotgun will also be raffled. Tickets for the gun are $20 each or six for $100. There is over $2,000 in prizes. The raffle winners will be announced between 3 and 4 p.m.

“We have made a lot of improvements. We are using every piece of space that we can. We have really grown,” Rooks said.

There will also be a patriotic tribute by Keith and Jackie Harling, with the help of Cub Scout Pack 3229 and Boy Scout Troop 29 from New Salem.

“It takes a village! We are very grateful for all that Jason and Misty do for Hand Up; they are family. Along with their Smoke on the Square team they are pulling our community together and are making a huge difference! We are so blessed. There is hope and Smoke on the Square is spreading this hope,” Rex Mayo, founder of A Hand Up Ministry said.