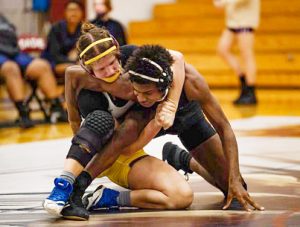 Dade County High School now has an all-girls wrestling team, led by Coach Jeff Poston. There are currently nine girls on the team, and Poston hopes to encourage more girls to join before the start of the season this winter.

“The idea to start the team really came up because of Heidi Raines, who has wrestled since she was a little girl. She is such a leader, and she was all for helping other girls experience the sport and learn the life lessons it teaches,” Poston said.

“I have kind of allowed Heidi to lead them the first few weeks. When it’s all said and done this will be a part of her legacy here at Dade,” Poston said.

Last year, the Sentinel had the chance to interview Raines. She told the Sentinel, “My little brother started going to wrestling practice. I liked it. My dad used to tell me, ‘I know a six-year-old that can whoop you.’ It was my cousin, Landon. That is really what got me into it.”

Coach Poston is still working on the team’s schedule and said that it will most likely be all tournaments.

“We do have a home date scheduled with Murray County, who is trying to start a team as well. At the end of the season there is a dual tournament for girls, and an individual tournament at the region and state level,” Poston said.

This season, the girls can choose to wrestle the boys, but, according to Poston, wrestling will be a dual gender sport next year in Georgia, so it will be completely separated. Heidi will wrestle with the boys in duals, but the other girls on the team will only wrestle other girls.

“It is different to coach girls. Girls are more coachable,” Poston said. “They listen, they’re respectful all the time, where the boys are a little more hardheaded sometimes. It has been extremely fun so far.”

Poston said that his goal for the team this year is to win their region and to qualify all the girls for the state tournament.

“We want to take over the state with our girls’ team. It doesn’t matter to us that it’s a new thing. The goals are the same as they are with the boys, to win,” Poston said.

Ninth grader Maleah Wilson, age 14, and daughter to Greg Wilson and Jessica Straughn, is one of the wrestling team members. Wilson joined the team because she said wanted to do something challenging.

Wilson said that her goals for the team and for the upcoming season are “to help each other learn more, to learn from my mistakes and have an amazing team bond.”

Jerzee Crabtree, age 15 and a sophomore, daughter of Chastity and Scott Crabtree, joined because she grew up watching recreation club wrestling tournaments.

“I fell in love, so with Poston’s encouragement, I decided to give it a try. I love practices. Being able to be on a team but still compete for yourself is great. I love the connects I have gotten since joining,” Crabtree said.

Crabtree continued, “My goal for myself is to at least get out there and try. I hope our team will go to state. I am so excited to see what the season will bring.”

For more information as the wrestling season starts, visit dadecountyathletics.com.