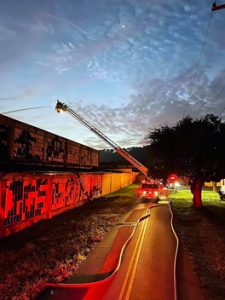 The Trenton-Dade Fire Department responded on early Tuesday morning, Aug. 22 to a fire in a vacant commercial building in Rossville. The fire took many hours to put out. Much of the building is a total loss. It is unknown how the fire started.

The Dade County Sheriff’s Office and the Trenton-Dade Fire Department came to the aid of two separate incidents in Marion and Walker Counties on Tuesday, Aug. 22.

A Bell 206 helicopter, carrying the two men, struck a power line near I-24 in Marion County, and crashed around 4 p.m. Central Time. Russell was the helicopter pilot. The power lines fell across I-24, which forced the road to be closed for several hours.

The power lines were cleared, but the search for the helicopter took several hours. Multiple agencies responded to help with the search, including the Dade County Sheriff’s Office.

“We assisted with checking locations inside Dade and Marion Counties for the downed chopper,” Detective Chad Payne, with the Sheriff’s Office, said. “While attempting to locate the chopper, Dade County Units used vehicles and ATVs to check areas until the crash site was finally located. Dade County deputies also assisted with traffic and closing Highway 299 to traffic. Sheriff Cross stayed with the Command Post for most of the night.”

The Federal Aviation Administration (FAA) and the National Transportation Safety Board are investigating the accident. According to the FAA, the helicopter crashed in a wooded area on Aetna Mountain.

“While the investigation is ongoing, please give the families their privacy as we go forward. Today is a very tragic day for law enforcement, we appreciate all your support and patience,” Captain Travis Plotzer said during the press conference.

In addition, on early Tuesday morning, Aug. 22, Trenton-Dade Fire Department, along with other multiple units from Walker County, Catoosa County, and Hamilton County, responded to a structure fire at a large vacant industrial building in Rossville.

According to walkercountyga.gov, the roof collapsed on the 240,000 square foot building, trapping flames underneath the rubble. It took about five hours to get the fire under control.

“We were contacted by Tri-State Mutual Aid to assist Rossville with a commercial fire with our ladder truck. We were contacted around 3:30 a.m.,” Trenton-Dade Assistant Fire Chief Ansel Smith said. “When we arrived on scene, we set the ladder up and Catoosa Engine 7 supplied us with water from the hydrant and we flowed water from the ladder until around 4 p.m., when we were released from the scene.”

It is estimated that about 75 percent of the building is a total loss. The vacant building did not have any power. The cause of the fire is currently unknown, and there were no injuries. Walker County’s new Accelerant Detection Canine Team is investigating the incident.