Patti Johnson, Director of Academics and Testing spoke to the Dade County Board of Education about educational assessments during the Monday, Aug. 22 meeting.

According to Johnson, the schools will work with Northwest Georgia Regional Educational Service Agency (RESA) when the Measures of Academic Progress (MAP) assessment is given later this year. A representative from RESA will come in to help the teachers understand better how to use MAP as an instructional tool to improve academics.

“In this first year, we just gave the test, we didn’t realize how well it lined up with Milestones. After we got the results back, we realized it’s an instructional tool that we can use. Milestones is one and done, and it’s always at the end of the year, and we don’t have the knowledge, but with MAP, throughout the year, we’re already getting data back,” Johnson said.

Johnson informed the board members that she thought it was money well spent for such a diagnostic tool.

“I have heard several teachers say that they are pleased with what it is showing us,” Johnson said.

Johnson told the board that the information that was received over the summer from both MAP and Milestones was used to create the intervention groups for this year.

“What’s good about it is that the teacher didn’t have to take the time out on day one to figure out what level their kids are on,” Johnson said.

Johnson also showed Board of Education members the Milestone scores.

“I want to take a moment to brag. Our district has outperformed the RESA District, which is 17 school systems, and the state level. This is with two years of COVID issues,” Johnson said.

Johnson also spoke about a program called My Path, through Imagine Learning.

The administration looked at My Path last spring and were able to have a demonstration of it. Johnson asked the board to approve the purchase of the English Language Arts portion of My Path. The board approved the purchase.

“It has a lot of research behind it. Every student who used this program made one or more points higher on the Milestones then the kids who did not have this program,” Johnson said.

Also, during the meeting Superintendent Josh Ingle reported that as of the meeting, 12 days of school have been completed.

“Overall, as a system, we are up by 21 students compared to the same time last year,” Ingle said.

Ingle also recognized the cafeteria workers, noting that all four schools had their health inspections, and all received a perfect score. 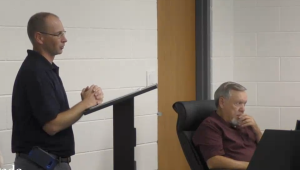 Chris Chance, Director of Bands at Dade County High and Middle Schools, asked the Board of Education for permission for the band students to go to Universal Studios in April 2023. The Board approved the trip.

The board approved a trip to Universal Studios in Orlando in April 2023. Chris Chance, Director of Bands, told the board that he would like the high school and eighth grade band students to attend a studio design workshop at Universal Studios. The cost would be about $900 per student.

“The kids will work on a piece of music, and they will work with a guest conductor at the park, and with the video and audio sound engineers. They will get to learn about that recording industry part as well. After we record the piece of music, their audio and visual people will take what they have recorded and set it overtop of scenes for one of the movies from Universal Pictures,” Chance said.

The board approved multiple memorandums of understanding with Dalton State, Covenant College, Georgia College and the Southern Regional Education Board.

The board went into executive session to discuss personnel matters. The board approved the resignation of Rodney Cartwright. The board also approved the hiring of Brynn Stevens, April Abernathy, Ethan Blake, Grace Pearson, Coleen Lawson, Jamie Rollings and Tammy Daughtery.

The next Dade County Board of Education meeting will be Sept. 26.