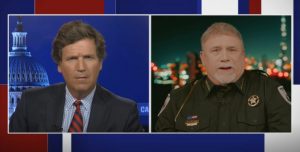 Dade County Sheriff Ray Cross appeared on the Tucker Carlson Tonight Show to talk about the recent bus that came through Dade County, which was transporting migrants to Washington D.C.

“The Biden administration has opened our borders completely to the rest of the world, and millions have come across. One of the responses to this is the governor of Texas has begun bussing migrants to sanctuary cities like D.C. and New York. But it turns out that a lot of these illegal aliens are not making it to those cities,” Tucker Carlson said.

Tucker continued, “They are winding up in places like tiny Dade County, Georgia, in the rural western part of the state.”

Cross told Tucker that on Wednesday, Aug. 10, he received a call from the 911 center that a bus had dropped off several migrants off at the Pilot in Rising Fawn. He said that when he arrived at the truck stop, he saw the bus pulling away, with the migrants following along behind the bus.

“I stopped the bus and I went up to the driver and I asked what he was doing. He said, ‘I can’t stop them from getting off the bus. I said, ‘Well you’re not leaving them here.’ They have no resources, we have nothing here for them in Dade County,” Cross said on the news segment.

Cross continued, “They were trying to trade pesos in the store for American currency. They had no way to buy food, no way to buy water.”

Cross brought a translator to the scene. With the translator’s help, he learned that the bus passengers were from Venezuela. Cross also told Tucker that there was a security guard on the bus, and Cross spoke with him as well.

“As we were talking to them, they stated that the bus driver was coercing them to get off the bus, and that Chattanooga was just a little way up the road, which that’s not true,” Cross said.

Cross noted that he had the bus driver call the owner of the bus line, based in Irving, Texas. The bus company was Coastal Crew Change LLC.

Cross told Tucker that he spoke with Governor Brian Kemp, and Kemp was able to get resources from Georgia State Patrol to help with the ongoing situation.

“This was all the bus line’s doing. I asked him what the destination was, and they told me Washington D.C. My theory is they are dropping them off along the way, so they don’t have to go all the way to Washington D.C. and still get paid for the full trip,” Cross said.

“It’s all so crazy and chaotic, it’s hard to believe that this actually happening,” Tucker responded to Cross at the end of the segment.

The segment of the show also featured previous clips of Detective Chad Payne, who spoke during a different, earlier Fox News show, and Jamya Reed from News Channel 9, reporting from Chattanooga.