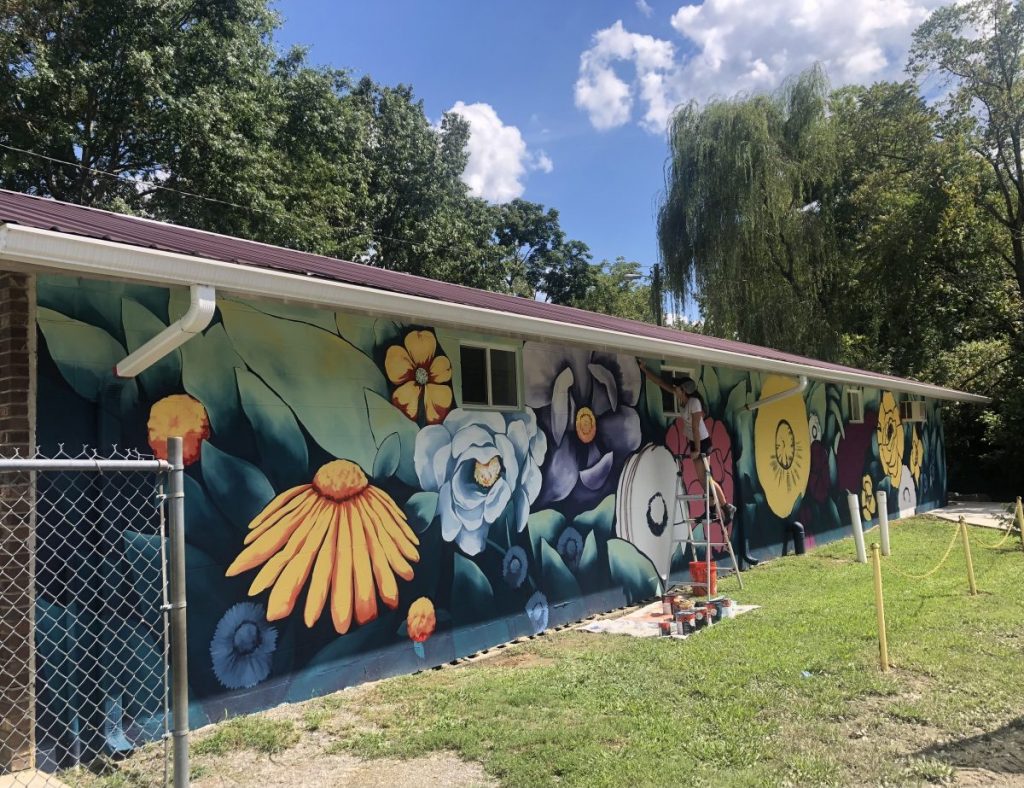 Photo courtesy of Jennifer Blair
Chattanooga artist Joy Taylor paints a mural on the Scout building at Jenkins Park. The mural was made possible by donations from local businesses, foundations, and individuals.

A mural on the Scout building in Jenkins Park is currently in the process of being painted by local artist Joy Taylor. Dade County citizen Jennifer Blair is the coordinator for the mural project.

“Visible from Main Street, this colorful, eye-catching mural serves as a signpost, demarcating the communal greenspace just beyond it. The art installation therefore improves both the access to and the aesthetic of the park, signaling its location to folks who may not be aware of the park’s existence and also beautifying its entrance from downtown. Moreover, the park exists for everyone, residents, and visitors to the area alike, and so too, public art belongs to us all. It is my sincere wish that this mural invokes pleasure and pride in each person who sees it,” Blair said.

Taylor is a muralist with several installations located in Chattanooga, including the Creative Discovery Museum and Chattanooga Zoo.

“Jenn reached out to me almost a year ago. She was initially trying to get a proposal together. She did a lot of the leg work to get things going. I drew a proposal of the mural to get things to move forward,” Taylor said.

“It’s wonderful when someone reaches out because they like your work. Environmentally themed work is my specialty,” Taylor said. “We wanted something nature-like that was pleasant and comforting. It’s been nice; everyone has been so sweet in town. I’ve been to the Corner Coffee a lot of times. It is nice to engage with people who are excited about the mural,” Taylor said.

To start the mural, there was a lot of prep work including removing all loose paint from the concrete wall. The wall was scrubbed, and power washed. Then the concrete was sealed.

“I use an exterior, flat latex paint. I first made just a bunch of marks, it was all placing and moving. From there, it’s layering with things,” Taylor said.

The mural work is being paid for with private funds. Donations have been given by foundations, businesses, and individuals including the Lyndhurst Foundation, Bobby Stone Foundation, Lookout River Foundation, ArtsBuild, Groovy Nomad, The SHOP: by Stevie and the Moon, Oakleaf Cottage, Faircloth Realty, Real Living Southern Realty, WINGS to SOAR, and David Wheeler.

Also, according to Blair, the mural would not have been possible without the support of the American Legion Post 106, the City of Trenton, the Tristate Heritage Arts and Culture Coalition, the Dade County Industrial Development Authority, and Scenic Dade.

Blair said that the new mural is important for many reasons, including providing an urban landmark, developing the character and culture of an area, encouraging pedestrian traffic, and fostering mental and emotional well-being.

“It also generates visibility and online presence of that area, because people will stand in front of it, snap their photo, and post the picture to social media, tagging Trenton, Dade County, Georgia, and is therefore promotional for tourism,” Blair said.

Blair continued, “I have personally donated hundreds of volunteer hours as the coordinator of this project, because I believe that we all deserve opportunities to encounter beauty, creativity, and inspiration.”

“Jenn has put in a lot of work trying to make that green space beautiful. Their overall goal is to make that space lovely, and to keep building up that nature,” Taylor said.