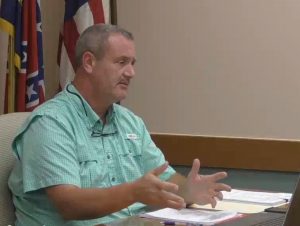 Trenton Mayor Alex Case asked citizens to please remain patient as the County and the City work together on plans for a new animal shelter. Case said that an architect is currently working on plans for a facility, which would be located behind the transfer station.

The City of Trenton Board of Commissioners spoke about plans for an animal shelter during the Monday, Aug. 8 meeting.

“We are in detailed discussions with the county to do something for an animal facility. We desperately need one. Ours is in a bad place,” Mayor Alex Case said.

Case noted that there are SPLOST funds available for the project, and that he has looked at a facility in Cherokee County. The plans for that facility were shared with the city and county.

“The biggest thing that we have to do is that we have to pay for this, run it and maintain it. Building it is not a problem. There’s sales tax here and SPLOST,” Case said.

Case also said that there are still a lot of questions that have to still be answered. For instance, the city of Trenton has animal control, but the county does not.

“You’ve got to have a facility that is 24/7 and you need to heat it, cool it, and water it. We are looking at facilities that does that for the same square foot price that we’re looking at,” Case said.

A director would be needed, as well as a veterinarian and both full-time and part-time workers.

An architect has been hired and is currently working on blueprints. The space for the facility would be located on property behind the transfer station.

“Our dump has been closed for 20 years. We have a facility that transfers recycling and garbage and it’s kept really clean. There are 13 straight acres that go behind the transfer station straight to the creek. There is sewer, power and water back there. There’s a section that’s in a 100 year flood plain but it could still be used for walking or areas of grass,” Case said.

Case continued, “This is the biggest hurdle for this Commission and the County Commission. Just be patient with us. We are working hard.”

The Commissioners also approved a purchase of a 2023 model truck with SPLOST funds, to be delivered next year, to replace a 15-year-old vehicle for the Parks and Recreation Department.

The Commissioners also approved the sealing and re-striping of parking spaces for the Civic Center parking lot, City Hall, and the parking spaces around the square, for $7,850.

Commissioner Monda Wooten updated the Commissioners about the recent theft at the city’s maintenance shop. It’s still an ongoing investigation.

“If anyone saw anything, that would be great. They had to have spent some time there. They got the truck; they hooked the trailer up to it. They then pulled the side-by-side up on the trailer. They got a bunch of weed eaters, some miscellaneous stuff, and then left,” Wooten said.

Case noted that he is looking into getting some surveillance cameras to be put outside the building.

Commissioner Mike Norris reported that the Trenton Police Department answered 337 calls for service for the month of July. They conducted 1,084 business checks and answered 18 burglary alarms. They responded to seven theft reports, seven domestic calls, 27 suspicious activity calls, and worked 20 accidents. 140 traffic stops resulted in 105 citations being issued. The collected fines for the month of July were $11,786.

Commissioner Terry Powell reported that the Civic Center was rented for 90 hours for the month of July. Animal control had four work orders. The community pool was rented for 44 hours for private parties.

“I am thankful for the workers we did have at the pool. If it wasn’t for them, we wouldn’t have had the pool open at all,” Powell said.

“Normally this time of year we have three full-time guys and two seasonal, and right now we just have two,” Wooten said.

“This is the second round. No one applied for it, and there were two years of COVID. A lot of things have been put on hold,” Case said.

Case noted that two of the projects that they would like to apply for include streetscaping on the square and the Town Creek Trail.

Mindy Haworth, manager of the Dade County Library reported that the library has an average of 114 daily visitors, and an average of 209 daily circulations. Also, the library is offering a six-week ACT test prep program for high school students.

Eloise Gass reported that Tree City USA members planted and cleaned up flower beds at the jail. Trees will be planted around the city as soon as the weather cools.

Kathleen Reed reported that the Alliance for Dade Plum Nelly Depot Art Show will be Aug. 20 at the Civic Center. The Alliance is also interviewing for the CEO and President position, and the director of tourism position. The criteria for the positions are listed on alliancefordade.com.

The Commissioners went into executive session to discuss legal and personnel matters. No action was taken afterward.
The next City of Trenton Board of Commissioners meeting will be Sept. 12.