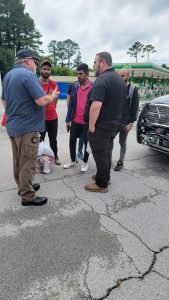 Sheriff Cross speaks with travelers who entered the country illegally, and were traveling enroute to Washington D.C. The bus transporting the people made a planned stop in Rising Fawn, and multiple people were planning to get off the bus at that stop and possibly make their way to Chattanooga.

Dade County Sheriff Ray Cross responded to the Pilot truck stop in Rising Fawn on Wednesday, Aug. 10, after receiving a call that tour buses were dropping off immigrants. Upon arrival, he immediately observed a tour bus, which appeared to be dropping off the subjects at that location.

Sheriff Cross approached the people in question and found that the bus was transporting people, who had entered the country illegally, from Texas to Washington, D.C.

The bus driver advised that this was one of their stops along their route, and several of the people had already decided to get off the bus and end their trip in Rising Fawn. Based off of Sheriff Cross’ conversation with the bus driver, it appeared as if the travelers were being encouraged to exit the bus at that location, with the impression that Chattanooga was within walking distance.

Sheriff Cross immediately got a translator, and created dialogue with the people, as well as the bus staff. After a short discussion with all the parties involved, the people chose to get back on the bus and continue their journey out of Dade County, and on to Washington, D.C.

Sheriff Cross spoke to the owner of the bus line and requested that he encourage his drivers not to drop off illegal immigrants in the rural areas of Dade County, where they have no resources, but preferably in a larger city, where resources are more readily available.

State Representative Mike Cameron released a statement on the incident.

“I support what Sheriff Cross did. Dade County is a rural area and the individuals who exited the bus would have not had food, water or shelter if they had stayed off the bus. Dade County does not have the infrastructure to provide services to individuals like this,” Cameron said.

Cameron continued, “I support what Governor Abbott is doing. However, there was no security on the bus; only an individual to monitor those on the bus and the driver. These buses need security to make sure the individuals in question get to their assigned destination. The bus company needs to handle this better.”

According to Dade County Detective Chad Payne, the Sheriff’s Office had been receiving tips for about a month that the bus was offloading migrants at the Pilot, but it was sporadic.

“We might get the call once and then not for two weeks. Now it seems like it has been every day for the last three days, and there was also one at the One9 Fuel Stop in Wildwood, too,” Payne said.

According to Payne, there was nothing that Sheriff Cross could do, pertaining to arresting the travelers.

“Georgia has no immigration laws, no laws against illegal immigration local authorizes cannot enforce federal law. There was absolutely nothing we could do,” Payne said.

Payne continued, “We tried everything we could do. We called immigration, and they said that their hands were tied. We just had to explain to them that they were in a rural area and way off from Chattanooga.”