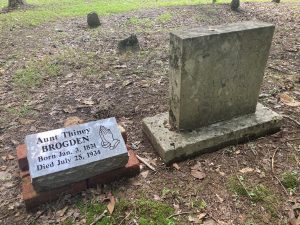 REBECCA HAZEN/Dade County Sentinel
Parthenia “Thenie” Strickland Brodgen was born a slave, and died as a free woman in Dade County. Rex Blevins and other members of the Historical Society have researched her life, and have identified her descendants. Aunt Thenie’s tombstone, spelled here with a different variation of her name, is in Sarah’s Chapel Cemetery next to her son Floyd’s tombstone.

Rex Blevins, and other members of the Dade County Historical Society, are putting together the pieces of the life of Parthenia “Thenie” Strickland Brodgen, who was born into slavery and died as a free woman in Dade County, to ensure that her life’s story is not forgotten.

Blevins family has a connection with Thenie, known as Aunt Thenie, starting with the land that the family lived on.

In 1910, Blevins’ great grandmother purchased a farm in Dade County, and Aunt Thenie was already living there.

“She was always at my mamaw’s house. She would eat at mamaw’s table. Every time my mamaw had a baby, she was like a midwife. Her son Floyd worked there on the farm, and her son Lloyd lived in Chattanooga. They were more or less just part of the family,” Blevins said.

Thenie’s father was named Moses. Census records state that she was born in Georgia, but it is not known where.

Most slaves, after being freed, took the surnames of their former owners. It is possible that her owner had the last name Strickland. It is also possible that whoever owned Thenie might have purchased land in Dade County and brought her there.

“She was quite a character. She was a legend in the New England community. The Aunt part is an honorific given to elderly Black people who were valuable to a family,” Joy Odom, a researcher for the Dade County Historical Society, said.

According to Odom, Thenie had a talent for healing, and understood and used a lot of herbs as medicine. She also made money by washing laundry.

Thenie married Knox Brogden, but the date of the wedding is unknown. It is unknown when Knox was born. Thenie and Knox started having children either in the late 1860s or early 1870s. In the 1910 census, Thenie was listed as having seven children, with three of them still living at the time.

The date of her birth, listed as Jan. 3, 1831, has recently been disputed after finding new census information.

“We were only able to find her in one census, but just over the weekend I found her two more times in the census. The rumor was that she was 103 when she died. In the first census, she said she was born in 1852, which is probably correct, but then she probably started buying into her own publicity, and she started saying she was born in the 1840s,” Odom said.

The family printed a thank you in the local paper after her death. It reads:

“We wish to thank our white friends, and colored, for their kindness shown us during the illness and after the death of our loving mother. Also Rev. W. M. Larr, for the lovely funeral sermon preached. We thank our white friends for the beautiful floral offerings; also for the sweet music rendered. Words cannot express our thanks. We pray God’s blessings upon each and every one. Your kindness will never be forgotten. The Family: Mattie Cole, Floyd Brodgen, Frank Brodgen, Fannie Brodgen and Claude Cole.”

Blevins wanted to find Thenie’s family members. There were several listings of Brogden in the Chattanooga telephone book

“I picked the first name listed, Delta Brodgen. I asked, “Did you ever know Aunt Thenie Brodgen? He just went bonkers,” Blevins said.

Thanks to that phone call, 12 descendants were able to come to Dade County, where Blevins showed them her tombstone and where her house stood. A pile of bricks is the only thing left of Thenie’s old place. Blevins has put a marker on the spot. Blevins also bought the tombstone for Thenie, at her burial site in Sarah’s Chapel Cemetery.

“I had always heard about Thenie, and I just love history. It’s so much of my family history,” Blevins said.

There is a planned walking tour of Sarah’s Chapel Cemetery in October. Blevins and Odom are hopeful that more of Brogden’s descendants are able to come, to learn more about their family history.

“How did an old Black woman live in an all-white community, and come to that level of recognition and respect in those days? She just made a place for herself, which wasn’t easy to do in those days. It’s remarkable,” Odom said.