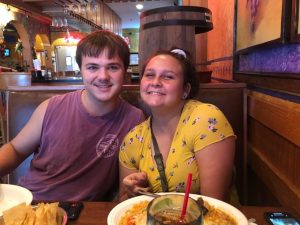 Lexi Moore, Tiffany Robertson’s daughter, was killed in a vehicle accident in which Logan Gordy was the driver. Robertson did not want Gordy to be charged with vehicular homicide, because it was accidental. Gordy recently accepted a plea deal, which carries a jail sentence time of eight months. Robertson and Lori Gordy, Gordy’s mother, are concerned about Gordy’s jail time because Gordy is autistic.

Logan Gordy has accepted a plea deal for charges from a vehicle accident on Oct. 3, 2019, in which 17-year-old passenger Alexis (Lexi) Moore was killed, and injuries were sustained by both passenger Chloe Aubreanna Baxley, and the driver of the other vehicle, Matisha Barajas.

Gordy was charged with homicide by vehicle in the first degree, four counts of serious injury by vehicle, reckless driving, failure to maintain lane, and driving on the wrong side of the roadway.

In addition, his driver’s license was surrendered. The 10-year probation charge will end after three years with good behavior, and Logan may receive his license back, but that time period has not been determined yet. Logan was also sentenced to complete 100 hours of community service work, and a defensive driving course.

Lori Gordy, mother of Logan, and Tiffany Robertson, mother of Lexi, are against the charges, and feel that the justice system failed Logan, who was 17 and a senior in high school at the time of the accident.

“We never said we didn’t want him to be accountable for his actions. At the end of the day, do we believe Logan was speeding, absolutely. Did he lose control of his car for whatever reason? Clearly. Yes, people were hurt, yes Lexi died. Lexi was like a daughter to me. Logan hasn’t been the same since. He has been suicidal. He didn’t get out of this scot free, even without the charges,” Gordy said.

Gordy continued, “Logan took the plea because even with reduced misdemeanor charges, it would have meant a longer time in jail. He needs this to be over. It affected him going to school, and his ability to get a job. We just wanted it to be fair. Do I agree that the jail time is right, no, but it was the lesser of two evils. Logan pays for this every day of his life. He misses Lexi terribly. I am sure the other victims were traumatized as well, and I hate that.”

Both Gordy and Robertson are upset because Robertson was not informed of the court date.

“I didn’t get any notification to stand up there and say anything. I understand why he took the plea deal. I was just trying to be Lexi’s voice. I am her mother; I know what she would have wanted. They successfully shut me down,” Robertson said.

Both are thankful that Logan is allowed to serve his sentence at the Dade County Jail but are concerned about the jail time because Gordy is autistic.

“I am eternally grateful to Captain Chambers and Sheriff Ray Cross for not sending him to another county. I cannot say enough good things about the Dade County Sheriff’s Department,” Gordy said.

According to Gordy, Logan’s autism affects his social and emotional skills, plus he is claustrophobic. He was diagnosed in the second grade. She thinks that because Gordy is so smart, people do not see the autism.

“After sentencing, he laid on the floor in a ball and cried that he wanted to kill himself. He is afraid to go to jail. He punishes himself every day. The D.A. felt that he needed to be punished more, for an accident,” Gordy said.

“He’s terrified to go to jail. If there’s bullies in there, it’s not going to go well for him. I think they should have taken his autism into consideration. He may not want to live, sitting there in jail. If anything happens to him, I will forever hold the D.A. responsible,” Robertson said.

The Sentinel reached out to Barajas, but she declined to comment.

“They took an inexperienced teenage driver and made an example out of him, for something that every one of us do. We all speed. We all cross over the middle line if we have to swerve out of the way,” Gordy said.

“I’m mad at the whole system. I am disappointed. It didn’t bring Lexi back. It didn’t stop the drama; it doesn’t stop anyone from having to go to therapy. I am going to go to the Governor and plead my side of the case and try to get him out of jail,” Robertson said.