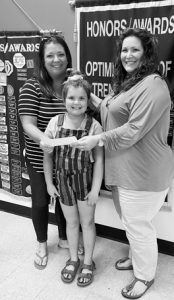 For a number of years Dolly Parton’s Imagination Library has provided free books to children from birth until they begin school. Books were mailed to their homes to all in the Dade community. As changes were made recently in the areas served from Chattanooga, Martha Baker, Dade First Family Connection Director, learned that Dade children would not be receiving any more books.

This news set a plan in motion to secure funding to make up for the cut in services for Dade children. At present, groups such as the Optimist Club are contributing to “180 for $18 Program” that would fund the availability of books for children in Dade. If 180 people donate $18, books will continue to reach children in Dade.

Did you know that 61 percent of low-income households do not have a single age appropriate book?

This can change in the community of Dade if groups and individuals continue to donate to Dade First-Family Connection. Contributions can be mailed to Ferst Readers, P.O. Box 1548, Trenton, GA 30752. Martha Baker is also available to share with all interested clubs, churches, etc., that would want to learn more about the Dade First Family Connection initiatives that directly impact the youth of Dade County.