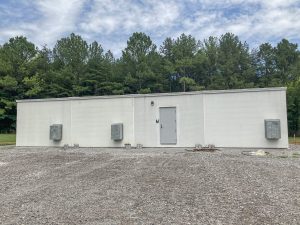 REBECCA HAZEN/Dade County Sentinel
The storm shelter located next door to the South Dade Community Center will be the new voting precinct for all elections.

Voters in the South Dade precinct will now vote in the new storm shelter building for all future elections. According to Board of Elections member Carolyn Hixson, a new location for the precinct was needed for many reasons.

“We have been actively searching for a different place for several elections. The building is very old, and it is not handicap accessible,” Hixson said.

According to Hixson, there are steps both outside and inside the South Dade Community Center building to access the voting location, and sections of the building are cold and dark. The new building has zero-step entry.

The new storm shelter is located right next to the South Dade Community Center, on School Street in Rising Fawn

“The building will meet all the requirements and needs of any voter. It will be well-lit, it will be warm, and there will be places to sit,” Hixson said.

The Board of Elections had to recently go through a process to get the voter precinct switched to the new building, including getting voters to sign a petition.

“The Superintendent has to have 10 active voters that live in that precinct. We had to have 10, so we got 20. It was no problem; everyone has been so excited. This is going to make a lot of people happy,” Hixson said.

During election time, if anyone goes to vote at the Community Center, there will be a sign there telling them to go to the storm shelter building next door.

The Board of Elections hopes to get at least 25 more poll workers for this upcoming election. To be a poll worker, one has to be a U.S. citizen, live in Dade County, be at least 16 years old, and be able to read and write in the English language.

Poll workers need to report to their precinct at 6 a.m. on Election Day. The poll worker is required to stay there until about 8 p.m. Poll workers are not allowed to leave for lunch, but they can bring their own food or have food delivered. They will get paid $140 for the day.

“You do have to swear an oath. It is important work. You are there working for your country, and you are doing community service,” Hixson said. “If it weren’t for the retired community, there wouldn’t be elections in America. They are dedicated folks.”