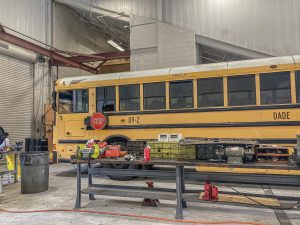 REBECCA HAZEN/Dade County Sentinel
A Dade County School bus sits in the garage, awaiting an inspection to determine if it is road ready for the upcoming school year. According to John Smith, Director of Facilities and Transportation, the buses go through an inspection every 20 days.

On the first day of school, Friday, Aug. 5, hundreds of students will be transported on school buses to Dade County Schools. According to John Smith, Supervisor of Facilities and Transportation, it is an extensive process to make sure that the school buses are ready, and the job becomes even busier as the school year progresses.

“All the buses have to be checked and maintained, everything from leaks, tires, to brakes. Everything has to be checked off. Safety is our number one priority. The guys in the garage are kept busy,” Smith said.

In addition, the buses need to be cleaned top to bottom and fueled up. There will also be a meeting with all the drivers, to re–familiarize the drivers with the procedures.

“I feel good at this point. We have had several drivers apply. Hopefully we will be closer to being fully staffed,” Smith said.

There are no new changes to bus routes this year. Smith noted that last year there were substantial changes due to driver shortages and fuel costs, and this year those changes are being carried over.

Smith noted that before he was Transportation Director, bus routes were grouped by ages of students.
Now, only one bus is running one route, and both young and older students ride on the same buses. But Smith hopes to return to the old routes someday, noting that they are preferred.

“You had two buses going the same routes. There are a lot of advantages to that. But now it’s more mileage, more fuel, more wear, and tear. We really didn’t have a choice,” Smith said.

Smith added, “Fuel prices as anywhere else are astronomical. We just got a shipment for $4.35 a gallon, and we get a discount too. It’s substantial when it’s double what it used to be.”

“Fortunately, we have been able to use some of the federal allocation from the ESSER funds (Elementary and Secondary School Emergency Relief) to help offset some of the fuel costs. Initially that was not an allowable expenditure. Now we are able to use those funds, which certainly helps our general fund,” Superintendent Josh Ingle said.

Last year, there were 1,228 miles are driven each day to transport the students to and from school. This does not include miles that are driven for field trips and extracurricular activities.

There are 27 buses, and 20 established bus routes. Right now, 19 of those bus routes are being driven.

The newer buses are more fuel efficient, which helps save money in the long run. Those buses have been assigned to the longer routes.

“The purchasing of buses is driven by finances, but we do receive funding from the Department of Education for replacement buses for time to time. Next year we will receive an allocation to replace up to five buses. Of course, it doesn’t cover the entire cost, so the additional amount will come from SPLOST funds,” Ingle said.

Once the school year starts, Smith says that the work is “nonstop.”

“It’s nonstop from beginning to end, from 6 a.m. to about 5 p.m. in the evening. There could be driver issues, disciplinary issues, mechanical issues. These all require time. On top of that you need to coordinate trips and buses. We are required by the state to do an inspection every 20 days on a bus, in addition to annual summer maintenance. There’s so much to it,” Smith said.