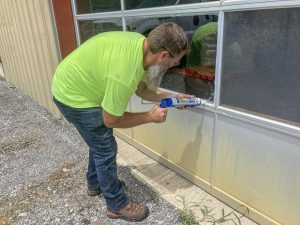 REBECCA HAZEN/Dade County Sentinel
City worker Chad Palmer puts a new window panel in place in a garage door. The window was smashed during a burglary of the city’s maintenance facility.

The City of Trenton Maintenance Facility was robbed sometime overnight between Thursday, July 21 and Friday, July 22.

According to Street Department Commissioner Monda Wooten, the suspects stole a F-150 Ford truck, a trailer, side by side utility vehicle, seven weed eaters, a brand-new set of commercial tools that the Street Department just bought, and several other odds and ends.

“We’ve recovered the truck just recently. Today, the Hammondville Police found our truck off the side of a road bank in a kudzu patch,” Wooten said on Friday morning.

The suspects removed a fence panel, part of the entrance gate, and broke a window in one of the garage doors at the Maintenance Facility.

“It must have been multiple people. They had to be there for a while. The equipment was both inside and outside. They pulled out one of our road closed signs and used it as a ramp to load up the trailer,” Wooten said.

The suspects then went to T&T Golf Carts, where they attempted to hot wire some golf carts, but were unsuccessful.

“We know it must have been the same set of people because they left some of our tools down there,” Wooten said.

Wooten noted that the Street Department has opened a claim with their insurance.

The City of Trenton Police Department is actively investigating the incident. If anyone has information about the incident, call Trenton City Hall at (706) 657-4167.