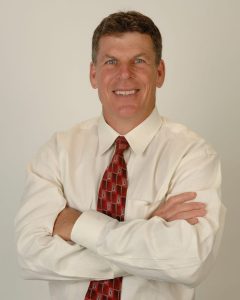 Patrick Core is retiring from WDEF News 12 after spending the last 32 years as the station’s chief meteorologist.

Core, from Trenton, noted that spending nearly half of his lifetime at WDEF News 12 was “a whirlwind.”

“It was something that I dreamed of, and it was a challenge. It was fulfilling and it was never boring. It was rewarding to be able to serve the public in the Chattanooga area for over 32 years,” Core said.

Core never expected to become a meteorologist. When he was young, he played basketball, football, and baseball, and he expected to play sports in college.

“Right before my senior year, during a summer job, I got into a bad accident, and I lost part of my foot. That limited my athletic career. I was at a crossroads. I always enjoyed the weather and enjoyed watching the weatherman on TV. God showed me a different path and he took me into meteorology,” Core said.

Core went to college at Florida State. His first job was at a small station in Albany, Ga. From there, he worked at The Weather Channel in Atlanta for four years.

“That was a real neat experience. I was on air, but it was mostly overnights. I wanted to get more of a stable schedule for me and my wife, because we were just married, and we had a young child,” Core said

Meteorologist David Neal, who worked at WDEF at the time, told Core about an opening at the station. Neal and Core went to college together.

“The rest is history. I thought I’d be here just for a few years. My family loves it here, they loved growing up here. We established a home here. That was more important than moving around and jumping markets. I don’t regret a single minute of it,” Core said.

According to Core, the two biggest challenges, weather wise, in his career were the blizzard of 1993 and the 2011 tornado outbreak.

Core noted that the blizzard of 1993 was the storm of the century, and that it happened in March, which was late in the winter season. Two days prior it was 80 degrees. The area ended up receiving about 20 inches of snow.

The tornados in 2011 ended up being one of the deadliest tornado outbreaks ever recorded. Three tornados came through Dade County in one day, including an EF3 with winds of 150 miles per hour. Core said that the night prior, forecasts were showing that every factor needed that would lead to an outbreak was setting up.

“Fortunately, and unfortunately the forecasts were correct. They were terrible events, but they were forecasted properly. I was thankful and blessed that I was able to inform the public of what was going to happen before each event,” Core said.

Core will not disappear entirely at the station; he expects to fill in from time to time. Also, Core will continue to run The Tri-State Weather Network, his business, which provides consulting and weather information for different area radio stations. It is also where he provides daily weather forecasts, which can be found on Facebook.

“I am going to concentrate my efforts on the Tri-State Weather Network and spend more time with my family and grandchildren. I’d like to do a little traveling. I love to garden and fish, so I will have more time available to do that,” Core said.

Core thanked his colleagues at WDEF, saying that they’ve all been a family, and thanked the viewers

“The viewers have been so loyal. I can never repay that. They have stuck with me for all these years. Without the viewers and the listeners, I wouldn’t be where I am today,” Core said.