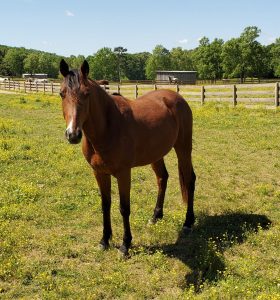 Kirby has lived at the Red Clay Ranch Equine Rescue and Sanctuary, Inc. for three years, and he will stay there for the rest of his life. Red Clay Ranch is a 501c3 non-profit organization that offers rehabilitation and sanctuary to horses in need.

Horses Kirby and Dakota, who were rescued in September 2019 from Dade County, are now living out their best lives at the Red Clay Ranch (RCR) Equine Rescue and Sanctuary, Inc. in Lyerly.

Lee Rast, CEO of RCR, recalled the days when they first rescued the horses, and gave an update on how they are doing now.

RCR is a fully licensed, 501c3 non-profit organization that offers rehabilitation and sanctuary to horses in need. They are internationally accredited by the Global Federation of Animal Sanctuaries.

In early September 2019, a Dade County deputy received an anonymous complaint about horses that were not receiving proper care.

Emily Brown, 21, from Sand Mountain, was charged with one count of felony aggravated animal cruelty, and three counts of misdemeanor animal cruelty.

“Summer Raley with the Dade County Sheriff’s Department called me, she was the pivotal person that saved these horses. There were four horses, and one was already dead,” Rast said.

Rast remembered that there wasn’t any green grass on the property for the horses to eat, and that it was a particularly hot, dry time of year. Green algae was floating on the dwindling pond where the horses drank from.

Rast noted that the other two horses’ conditions weren’t too bad, but Kirby was close to the point of starvation.

“What happens first is the visible fat goes. Then the muscle starts to go. He couldn’t get up; he had no functional muscle. The third thing to degrade is the smooth muscle, which is internal organs, like heart, lungs. When a horse is as starved as Kirby was, we don’t know what kind of internal damage was done,” Rast explained.

Rast ended up taking Kirby, and another horse that they named Dakota, back to RCR.

“Honestly, I didn’t think he’d live. The other horse, Dakota, she was thin but not nearly as thin as Kirby. She sprung back quickly,” Rast said.

At RCR, Kirby was put into a mechanical sling that was attached to the top of the barn, so that he could stay standing up. If Kirby was to lie down, he couldn’t get back up. Kirby was kept in the sling for about three weeks.

“We would bring him out every couple of days and let him walk a bit. It was a real balancing act because we didn’t want him to waste any calories. About three weeks later he got up and we knew he’d make it then,” Rast said.

Most of the horses at RCR stay for life, but occasionally some horses are adopted out. Dakota will soon go to her forever home in North Carolina. Rast noted that she wants Kirby to stay at RCR.

“He suffered enough, he is going to live his life out with us and enjoy being a horse. He’s stunning and spoiled,” Rast said.

The ranch was established 11 years ago and there are currently 83 horses there. Rast said that it was either “divine providence or dumb luck” that started RCR.

“I have five children, and they joke that once the kids left, I picked up the horses as a mid-life crisis. It just happened, but we are grateful it happened,” Rast said.

Last month, RCR recently posted an updated picture of Kirby on Facebook, noting that he was “ready for his GQ cover.”

The Dade County Sheriff’s Department responded to the picture, saying, “Everyone gave this guy little to no chance to survive, but he had other plans. We give so much thanks to Red Clay Ranch Equine Rescue and Sanctuary, Inc., for everything they did, and everything they continue to do. Without them, Kirby would have never survived.”

RCR is in need of horse quality hay, due to having little rainfall in the area since April. Rast noted that any help with shipments and donations would be greatly appreciated. For more information, visit redclayrescue.org.