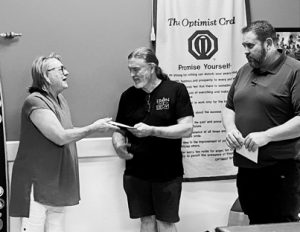 Dena Abel, Optimist member, shares gifts of gratitude to Rex Mayo and Captain Joe Chambers for being chosen as Citizens of the Quarter by Trenton Dade Optimist Club.

One of the programs of the Trenton Dade Optimist Club honors Dade citizens that have made a contribution to the community. Often recipients are those that avoid recognition and go about their lives enjoying the benefits of their contributions. The unsung heroes are the individuals that humble themselves to be observers and seek no attention for their good deeds.

Two citizens that work hand and hand to create an opportunity for men and women entering the Dade County incarceration system to exit with a support system are Captain Joe Chambers and Chaplain Rex Mayo.

In 2014 Dade County Sheriff Ray Cross assigned Captain Joe Chambers as head of Jail Operations and challenged him to consider options that could empower incarcerated men and women to break a destructive pattern in their lives and learn to make better decisions.

After much research and consultation with other law enforcement leaders, Joe began finding a way to work with Jail Chaplain Rex Mayo to investigate in depth a program entitled, ‘Celebrate Recovery.”

One of the strengths of this program is a strong emphasis on recovery inside and outside the jail. The program has a safety net for those leaving jail and choosing to step back into the community with better decision-making skills. With the contributions from churches, individuals, and groups in the community, current support is available for men and women.

Rex Mayo and Joe Chambers, chosen as Citizens of the Quarter by Trenton Dade Optimist Club, are dedicated to the challenge fostered by Sheriff Ray Cross to truly make a difference in the lives of incarcerated individuals that choose to make life changing decisions.

Jane Dixon is president of the Trenton Dade Optimist Club.