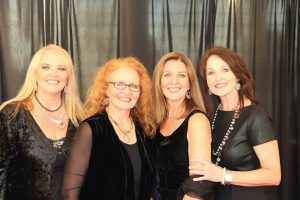 The Forester Sisters will open the 1945 Dade County Fair at noon on July 4 by singing the national anthem.

There will be free, family-friendly fun for all at the 1945 Dade County Fair, to be held this Monday, July 4, at Jenkins Park, starting at noon and ending with the fireworks show at approximately 10 p.m.

“If the weather cooperates, everything will be fantastic,” event organizer Nathan Wooten said. “Everything has come together well. This committee works hard. The number one goal for all of this is that it’s free admission.”

“I can’t tell you who it is going to be, but we have picked someone who has given their life to the county,” Wooten said.

There will be music entertainment throughout the day. The lineup includes Chattanooga group Southwind Bluegrass, Dade County musician Camden Smith, Katrina Barclay, Corey Layne, and headliner Mitch Rossell, a singer and songwriter from Tennessee. Rossell has written hits including Garth Brooks’ “Ask Me How I Know.” This summer, Rossell has been the opening act for Garth Brooks’ tour. Music starts at 12:30, and Rossell will take the state at 7:30 p.m.

DJs from Chattanooga’s first rock ‘n’ roll station, The Big Jet-FLI will also have a booth at the fair and will play music in between music performances.

Contests and tournaments include a hairy leg contest, derby car race, watermelon and hotdog eating contests, a frozen t-shirt contest, redneck races, a softball tournament, and a corn hole tournament. There will also be various carnival games throughout the park.

In addition, there will be a car show from noon to 5 p.m., with trophies awarded at 5 p.m.

There’s going to be plenty for kids to do in the kid’s zone, which will feature the popular foam machine and pony rides.

There will also be events inside the Civic Center, giving folks a chance to stay cool. The events there include a pie baking contest, cake walk contest, bingo, and a talent show. There will be a $500 cash prize to the winner of the talent show, plus $250 and $100 for second and third place.

A silent auction will also be held. Some of the prizes include a week’s stay at a condo in Florida, artwork by local artist Ken Pennington, and handcrafted Amish chairs.

In addition to all the fun and games, the fair will feature about 80 vendors and 15 food vendors. Some of the food vendors will be fundraising, such as the Dade County Band Boosters, and the family and friends of Zoe Floyd, who will sell homemade ice cream to raise money for Floyd’s medical expenses. Floyd recently had brain surgery to remove a tumor.

A program will be available, which includes a map a schedule of all events, and a list of the vendors and sponsors.

Parking will be at the flea market field, the Dade Elementary School, near the Courthouse, and on Railway Lane. Shuttle buses will run back and forth from the parking lots to the park.

Nathan said that this year’s goal is to improve and smooth out the bumps from last year’s event.

“You’ve heard the saying. There’s a duck on a pond, and a whole lot of paddling going on underneath. What we’re trying to do is fix the tiny issues. This year will be bigger and better than ever. We are all excited,” Wooten said.