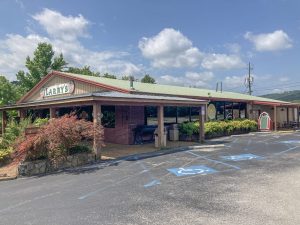 REBECCA HAZEN/Dade County Sentinel
Two applications for liquor stores in the city of Trenton have been approved by the Planning Commission. One of the stores will be in the former Larry’s Restaurant building, pictured here.

Ansel Smith, with the City’s Planning Commission, informed the City of Trenton Board of Commissioners during the commission’s meeting on Monday, June 13, that two applications for liquor stores have been approved.

One liquor store will be located in the old Larry’s Restaurant building, located at 4514 Highway 136. The second one will be built on McKaig Road, in the cleared area near the Food City.

“The Planning Commission met and discussed and approved both locations for distilled package sales. The Mayor and myself looked through the applications two to three times just to make sure we didn’t miss anything. They have got everything they need to move forward,” Smith said.

According to Smith, one more application has come through for a location in the B-R Business-Residential district. The Planning Commission will have to meet to look over that application before it is approved.

Also, during the meeting Case informed the Commissioners that finding a truck for Sewer Department Manager Dewayne Moore has proven to be difficult. During last month’s meeting it was noted that Moore’s truck had broken down and a new vehicle was needed.

“There is a huge shortage nationwide. What we did find was so expensive, that it’s not worth it,” Case said.

Case noted that they also received word from Prater Ford, where most of the city’s orders are from.

“The days of these fleet vehicles being available are nearly gone because of the shortages. In mid-June they are going to start taking orders for Expeditions and in mid-July the F-150s, and police Explorers and Interceptors in mid-August. What we are hearing is that we have to be in line pretty quick. We need to be ahead of the game,” Case said.

The Commission approved an intergovernmental agreement with the Dade County Commission for T-SPLOST, to put it on the November ballot.

“We will ask the citizens to vote and try to improve our roads. We’ve got 20 miles of road. We would fix the worst first. If not, then we’re matching 30 percent each year with our LMIG (Local Maintenance and Improvement Grant),” Case said.

The Commissioners also approved the 5-year update of the Trenton-Dade Joint Comprehensive Plan. The plan is now good through 2027.

Commissioner Mike Norris reported that the Trenton Police Department answered 1,283 calls for service during the month of May, conducted 921 business checks, responded to seven animal complaints, four domestic disturbance calls, 10 trespassing calls, 32 suspicious activity calls. 122 traffic stops were conducted, resulting in 65 citations. The total amount of collected fines for the month of May was $6,886.

Commissioner Terry Powell reported that the community center was rented for 157 hours during the month of May. There were 12 animal control work orders.

Powell also noted that there is a lifeguard shortage for the city pool. The closure dates for the pool are posted on the city’s website.

“We have advertised and sent out memos to several schools before school ended, but there is just no one to fill these positions. The people that are working at the pool, they should be commended. I ask everyone to please have patience,” Powell said.

Commissioner Lucretia Houts reported that the Sewer Department had 37 underground locates, six emergency locates, 11 sewer calls, and one line inspection. There were four remodels, three property reviews and two new constructions. There were eight electrical and HVAC and plumbing inspections. The fire department had 79 calls for the month of May, including 11 fire related, three accidents, standbys 13 and were dispatched and cancelled in route 48 times.

Case reported that Kathleen Reed is the new deputy clerk for the City of Trenton. A part-time position was also recently filled. Case thanked City Clerk April Keith for all her hard work.

“We are going to start reporting a month behind based due to the quickness of getting things in and balanced,” Case said.

Community member John Huffman spoke during the citizen participation portion of the meeting and asked for the city to improve their communication efforts. Huffman noted that the city’s Facebook page and the website need to be updated more often.

“We take the time to type out a message, and then we have to take more time and call and re-ask the same question instead of the message being answered in the beginning. Calling is outdated,” Huffman said.

Huffman also noted that more information needed to be available on the city’s website, including agendas for meetings. He also suggested that information about Jenkins Park and the animal shelter should be included on the website.

“I know for a fact that people have lived in Trenton for decades and didn’t know that the (animal shelter) building was back there. Once pets go there, where are you posting the pictures to inform the public who is looking for them, or who wants to adopt them,” Huffman asked.

Dade County Public Library Manager Mindy Haworth reported that the Summer Reading Challenge has launched and has so far been successful. Haworth also said that the library has added 75 new children’s books and 60 adult books during the month of May.

Alliance for Dade board member Jane Dixon reported that in 2021, there were 410 visitors to the Alliance’s Welcome Center. So far, for the year of 2022, there have been 218 visitors, with 65 people visiting in May. Dixon also said that the Alliance would help with the watermelon and hot dog eating contests during next month’s 1945 Dade County Fair.

The next City of Trenton Board of Commissioners meeting is July 11.