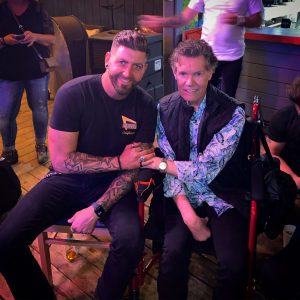 Photo courtesy of Chris Shupe
Local country musician and songwriter Chris Shupe recently played at the kick off party for the CMA Fest, an annual country music four-day festival held each June in Nashville. While there, he had the opportunity to meet Randy Travis. Shupe has also recently released his second single, “Where I Call Home.”

Dade County native Chris Shupe is making strides as a new country music singer-songwriter and has recently released his second single “Where I Call Home,” as well as played at some popular music festivals.

Shupe has been spending his time between Dade County and Nashville to be able to work on his music career. Recently, he played during the Kickoff Party of the CMA Fest in early June. The CMA Fest is a four-day music festival centered on country music, hosted each June by the Country Music Association in Nashville.

“It was awesome. When you start writing songs with people who live in Nashville, you start getting invited to song writing festivals. I played a big one in Key West. Next thing I know, they wanted to know if I wanted to be added to rosters for other shows,” Shupe said.

Shupe’s second single, “Where I Call Home,” was released on June 10. The song was recorded at the same time he recorded his first single, “California Sky,” on Music Row with Grammy Award winning musicians.

Shupe wrote the song himself, and he was inspired to write it after a day in Chicago.

“There was a girl that was walking, and she looked very frustrated. She was holding a cell phone, dressed in a business suit, and had a briefcase. I wondered what she would think if she could see Dade County. I thought I would write a song about that, about how she could go down a back road, away from the city,” Shupe said.

“Where I Call Home” is available to purchase now and can be streamed on Apple Music and Spotify.

Shupe originally started out in the rock genre. He was a part of a rock band for 15 years and released three albums, but he felt like he belonged in the country genre, because he grew up listening to that kind of music.

He jump started his country music career last year after playing in the middle of Broadway Street in Nashville, and then playing at Tootsie’s Orchid Lounge.

Next on Shupe’s list is that he wants to release an extended play (EP) record, perhaps by the end of the year. He noted that he has written five songs that he would like to see on the EP, and he is going to start working on the project soon.

In addition, he is scheduled to play some shows in Pigeon Forge later in the year, and he is working on booking a full band tour. He is also coordinating with a music promoter in Australia to play some festivals over a span of a few weeks in October.

He also recently collaborated with other songwriters at Warner Chappell Music, Inc., to write a song.

“We pitched the song to Blake Shelton, Cody Johnson, and Chris Janson, and I am pretty sure Chris Janson is going to put it on his next album,” Shupe said.

Shupe continued, “Things have been growing really fast, and it’s been awesome.”