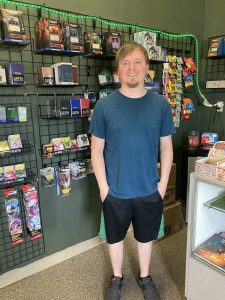 REBECCA HAZEN/Dade County Sentinel
Nick Wilson is an avid gamer and the owner of Druid’s Lair Cards and Gaming. Wilson wanted to create a space for gamers to purchase items and then be able to play those games with friends.

Druid’s Lair Cards and Gaming was opened over a year ago by owner Nick Wilson to create a new hangout space for community members, and a safe place for self-proclaimed “nerds.”

According to Wilson, a druid is a shapeshifting creature that lives in the forest. It also protects the forest and uses magic.

Wilson was a teacher for seven years at Dade County High School, and he has lived in Dade County since he was a child.

“I got to know the community well through the career of being a teacher. I have always been an avid gamer myself. I play card games, board games, and video games,” Wilson said. “I had this deep-rooted sense of desire to run my own gaming shop one day. None of the details mattered, like where or when, but I just had the passion and wanted to do that for myself.”

Wilson’s wife could tell that it was on his mind a lot, so she gave him the push he needed to open Druid’s Lair, just over a year ago. Wilson also noted that his wife is an artist, and they work well together, creatively.

“It turns out that Trenton was a great place to have this for youth and for middle aged people. I get a lot of people in the shop, and I am getting more new and familiar faces. Last year I had about 50-60 unique customers and since January I have seen that double,” Wilson said.

Wilson continued, “The most important thing I have taken note of is just being here. A lot of parents, a lot of young adults say that they are glad to have a place to come and hang out with fellow nerds. I try to make people feel welcome and give them a safe haven.”

Some of the products that Druid’s Lair carries include Pokémon, Magic: The Gathering, Dungeons and Dragons, board games, and novelty collectible items.

Not everyone has to be a gaming pro to enjoy Druid’s Lair. Every Thursday night is board game night, and the shop has popular, family favorites such as LIFE. There are also Nintendo Switch games for anyone who is interested in playing video games.

Wilson said that he is an avid Magic: The Gathering player, and that it is the original trading card game, almost 30 years old now. He also plays Pokémon, and he loves Dungeons and Dragons.

“I like to use my imagination; I am a creator at heart. I love to be the Dungeon Master because they create that world,” Wilson said.

Wilson continued, “I am not well versed in everything, but I do try to learn about the things I carry in my store.”

Looking toward the future, Wilson hopes to collaborate with the Dade County Public Library in the future, which has a budding Pokémon League. Wilson noted that he gets a lot of customers purchasing Pokémon items, but there aren’t many players in the store.

Also in the future, he would love to expand the shop, maybe in a year or two, noting that his playing space has shrunk a bit as he has gained more customers.

“The most important thing for me though is to not leave Trenton. My commitment to this community matters. To me, success isn’t about the money, it is about seeing happy faces,” Wilson said.

For more information about Druid’s Lair Cards & Gaming, email Wilson at druidslairlcc@gmail.com, or visit on both Facebook and Instagram, listed as Druids Lair LLC.