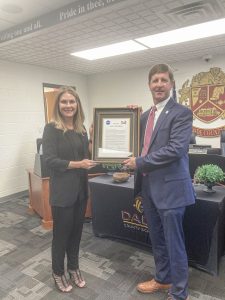 Academic Coaches at Davis and Dade Elementary Schools and Dade Middle School gave reports to the Board of Education during their meeting on Monday, May 23.

“MTSS is our school creating a system where we screen and assess students so that we meet all of needs and we don’t have students falling through the gaps,” Howard explained.

The school can address gaps through interventionalists with programs such as MAP, GloSS, Sonday, Heggerty, Fountas and Pinnell, Bridges Math and NZ Math.

“These screeners give us a very clear picture of which students need extra support and also academic intervention,” Howard said.

Howard continued, “MAP was new for us this year. We spent a lot of time trying to figure out what it all meant. We were able to meet 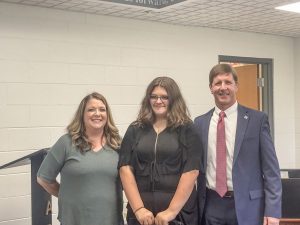 goals in reading and math in every grade level which is a great accomplishment to our teachers.”

Howard noted that 2020 was a difficult year, but Davis students not only survived, but thrived.

The school has worked toward their goals by creating flow charts, strengthening their response to intervention processes, and implementing WIN (What I Need) time to differentiate and provide more time to acceleration and extension.

Darlene Rogers, Academic Coach at Dade Elementary, spoke about the role of an academic coach, and about the reading intervention program, Sonday System.

“Due to learning loss over the covid years, my role has changed a bit. I work with 38 students in reading intervention because we thought that was a high priority to help those students catch up,” Rogers said.

“This is for the students who are not successful at the Tier I instruction, which is the instruction most learners perform at. When a student moves to Tier 2, and they need additional support for reading, that is when we give them extra help in reading,” Rogers said. “What we do is we do not pull the students during regular reading time; they get a double dose. It has been extremely successful.”

Rogers shared some parent and teacher testimonials with the Board members, and she noted that the common theme was that the student had gained confidence

“It changes their entire attitude about school,” Rogers said.

“We are in the middle. Our logo is a bridge. That is on purpose. We are a bridge between elementary and high school. We are going from concrete thinking to more abstract thinking,” Bell said. “We need to be able to know the best way to serve those kids.”

Bell noted that previously, the middle school did not have a system in place to address student needs.

“MTSS has been a God send because it has given us that structure to have a plan,” Bell said. “We started out with it last year, and now this year we are 100 percent into it.”

According to Bell, MTSS is data driven, which the middle school needed.

“You can’t just make a decision about a student based on a hunch, it’s got to be based on numbers,” Bell said. “It will give you a projection of what your scores will be, and I have been amazed at how close they’ve been.”

Bell also spoke about PBIS (Positive Behavior Interventions and Support) Rewards, where students can earn reward points to be used to buy things at teacher’s “stores.” There are also events, and students can buy tickets to the events with their points.

“Every time a child is ready, respectful, and responsible, they can get a point. The teachers love it, and the kids love it. It is very motivational,” Bell said.

Also, during the meeting Susan Reyes, Director of Special Programs, asked the board about the possibility of creating an outdoor sensory lab.

“We have found that a lot of our students are sensory seeking. They are always engaging in touching and running and lots of things that make it hard to sit down and learn. We already have sensory rooms. We would like to expand that outdoors,” Reyes said.

The outdoor space would include a music wall and different textures to touch and walk on.

Reyes asked the board for funding for a concrete walkway and fencing with an entrance gate.

Shenea Hill, Director of Career and Technology Innovation, informed the Board that the schools have received the first NASA HUNCH School of Excellence designation.

Hill noted that this has been five years in the making, starting with Dade Middle School receiving their first industrial 3D printer in 2018. The schools have since partnered with NASA HUNCH, StrataSys, Nanoracks and NASA.

The High School has launched a bio-medical pathway, and next year, there are plans to start a soft goods and culinary pathway through NASA HUNCH.

In addition, the Dade Middle School students as part of the GreenPower class won first place in both races with their electric car at Talladega on May 21.

“Your contributions are helping NASA meet its requirements and goals of space exploration. Thank you for your hard work and dedication. NASA HUNCH is very proud of your accomplishments,” Hill read.

Laura Beth Cunningham, 4-H Educator, spoke to the Board about 4-H programs and curriculum that she would like to implement at the schools.

4-H lessons include Farm to Fork, which teaches agriculture, finance and technology, and Less Stress on the Test, which teaches studying and coping techniques. There is also curriculum for plant classification, inherited traits, the water cycle and weather.

There are Adulting 101 classes, which are taught throughout the year before a student goes to college, on different subjects such as college admissions, budgeting, and career spotlights.

There are also educational field trips, ranging from one to three nights, at Georgia 4-H Centers.
In addition, there are also judging teams, such as for livestock, poultry, oral reasoning and public speaking, and problem solving.

“I would love to sit with all of the teachers, see what they need, and then pull our curriculum in. If I can give the child a different look, there might be something that clicks,” Cunningham said.

Middle school student Savannah Fraser was recognized at the meeting for winning the second annual art contest for Child Abuse Prevention Month. The top five were displayed at the Dade County Public Library and voted on by library patrons.

“One of our major focuses is prevention of child abuse in the month of April. The last two years, we have been so fortunate to partner with Dade Middle School to have this art contest,” Martha Baker, Dade First Family Connection Coordinator, said.

“Diedre is a wife and mom of three girls. She works extensively with the parents to meet their needs. She has worked on projects for the transition to adult life. She has a heart for families touched by disabilities. She has held multiple parent workshops on a variety of subjects. She planned and directed the Dade Games this year for special education students. Her background is in nursing, and it has brought a new perspective. She has answered many questions on health matters concerning families,” Ingle said.

Superintendent Josh Ingle noted that there will be two upcoming public hearings for the 2023 fiscal year budget, with a goal of voting on the budget during the June meeting.

The next Board of Education meeting will be June 27.