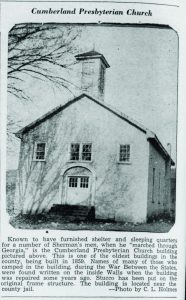 TUMC’s steeple and bell originally belonged to the Cumberland Presbyterian Church, pictured here, which was torn down. The CPC was used as a shelter for Union troops during the Civil War.

Chimes are ringing once again at Trenton United Methodist Church, after many years of being silent.

The new chimes are an addition to an old, long history of the church’s steeple and bell. According to Donna Street, Dade County historian, the bell and the steeple were originally on the Cumberland Presbyterian Church (CPC).

The CPC was famous because Union General Sherman’s men used it as a shelter during the Civil War, when they passed through on Sherman’s famous march through Georgia to Savannah. The CPC was one of the oldest buildings in the county, built in 1859.

“The church was torn down. When it was torn it down, the steeple and the bell were kept. John Leonard Case and Lula Leona Case had died in 1941 and 1945, so their five children bought that and had it put on Trenton Methodist to honor them,” Street said.

Information is not available about each of the five children, but Jules, one of the children, and his wife Thelma and their children, purchased electric chimes for the church.

“They were very unreliable,” church member Dottie Abercrombie said. “Any time it would rain, the time would be wrong. “They worked periodically until they just sort of vanished. Now we can play them at any time, like seasonal music, or for deaths.”

Abercrombie noted that TUMC was without chimes for at least two or three years.

The old chimes used to be played everyday noon. The new chimes have been programmed to ring on the hour as well as play a seasonal hymn at noon and 6 p.m. There will also be a call to worship ring on Sunday mornings at 9:45 a.m.

The chimes were installed May 18. Street said that there was a campaign throughout the fall to raise money for the chimes, led by Gary Moore.

Abercrombie and Street noted that the bell still works, and the children enjoy ringing the bell. The bell is rung for Wednesday night services.

“We had the chime company inspect our original bell and it is fine. They reported that it’s an old bronze bell, it is aged (good patina) but not rusty or too weathered, and the hanging hardware is in good shape. The bell is a size 24 and weighs about 200 pounds. The rope is also in good shape. The bell is hanging in its cradle at the top of the belfry, and the new speakers for the chimes are installed below,” Street said in a notice to TUMC members.

“It’s been a tradition that we’ve had this in the community, and it’s nice to have it back,” Street said.