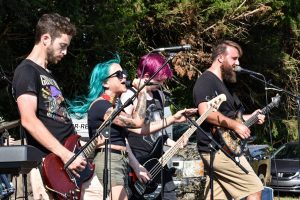 Valley Vibes Music and Arts Festival, founded by Dade County natives Adam Gann and Nate McDaniel, will be held in Walker County this year, in LaFayette, on Sept. 23-25. The band lineup was recently announced, and Early Bird discount tickets are available through the end of May.

The fourth annual Valley Vibes Music and Arts Festival, founded by Dade County natives and friends Adam Gann and Nate McDaniel, will move back to Walker County after being hosted in Dade County last year.

“It brings us great pain to have to move the festival out of Dade County,” McDaniel said. “We grew up in Dade County and wanted to bring new opportunities to the area. However, after what we’ll call a ‘shakedown’ by local government officials, we have decided to bring the event back to Walker County.”

McDaniel continued, “The Dade County Commission in particular presented several unnecessary obstacles. This is not the case when we host events in other areas. We are very familiar with how most municipalities handle permitting for events such as Valley Vibes and it was an uphill battle with the Dade County Commission last year. I hope the Commissioners will learn to work in tandem with new businesses instead of taking a reactive, regulatory approach.”

This year’s festival will be hosted at the 250–plus acre property at Cherokee Farms in LaFayette on Sept. 23-25.

The lineup of musicians was recently announced. The bands include Behold the Brave, Them Dirty Roses, The Pinkerton Raid, and The Cosmic Twelve. The bands will perform across three stages. The full line up can be found on Valley Vibes website.

“Genres range from rock and hip hop to nu metal and fusion. Essentially, anything that could be labeled ‘alternative music.’ This event truly shines a light on our large, diverse creative community,” Gann said.

In addition, there will also be dozens of local artists showcasing handcrafted goods, as well as several food trucks.

Visitors are encouraged to bring camping supplies like water, flashlights, and an overnight bag. If you plan on sticking around for the night, bring a tent or hammock. The main campground has dozens of acres for guests to choose from.

McDaniel and Gann said that the festival has doubled in attendance each year. They’re hopeful to see around 2,000 people attend this year’s event.

“Essentially, we build a small city from scratch each year. That necessitates dozens of moving parts which can get out of hand quickly if you don’t know what you’re doing,” Gann said.

“It’s a lot of work – and there’s no guarantee that you will see any return. We do this because we love the local creative community. It’s not about money and it’s not about clout,” McDaniel said.