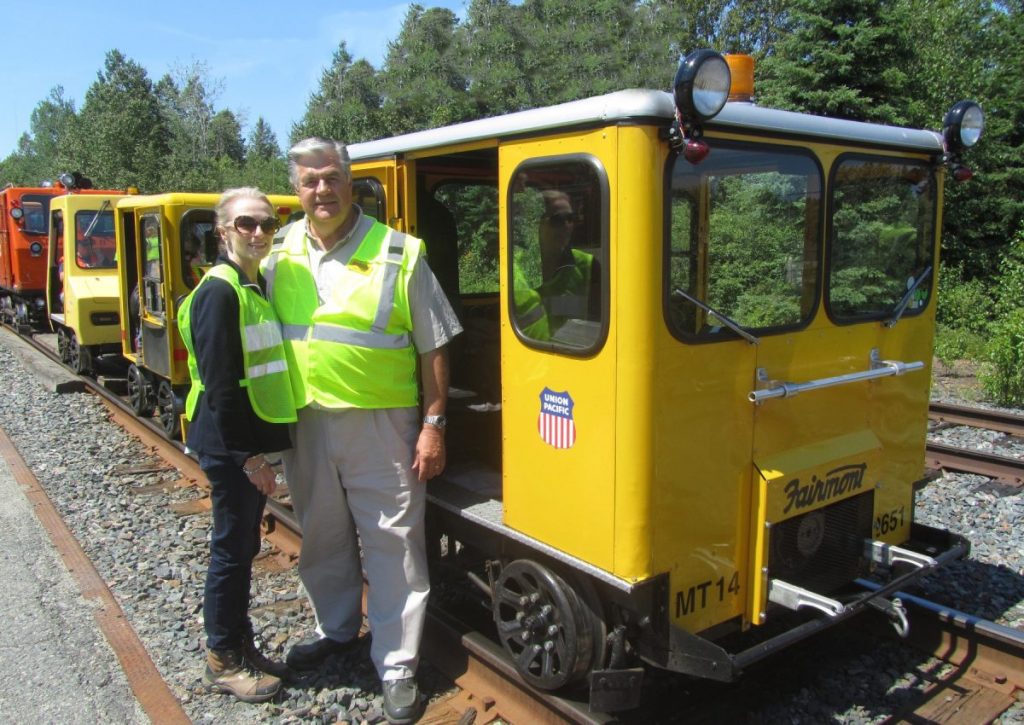 Photo courtesy of Phil Cagle
Shirley and Phil Cagle have seen the U.S. and Canada through the windows of their railway motorcars, or “speeders.” They belong to the North American Railcar Operators Association. The Cagles love the hobby, and the friendships and the opportunities it has provided.

Phil and Shirley Cagle are retired, and they are traveling and seeing the United States and Canada in a way that not many people get to experience – they travel by railroad motorcars, also known as “speeders.”

The Cagles, from Lookout Mountain in Dade County, have gone on many excursions on different railroad tracks all over the country, with the North American Railcar Operators Association (NARCOA). With permission from the railroads, members operate their motorcars on excursions that last for one day to over a week.

Speeders were used by railroads to inspect tracks for defects and to handle track maintenance. Eventually, they were phased out by the railroads, and Hy-Rail Vehicles are now in use, which are standard vehicles with retractable guide wheels that can drive on both roads and rails. The Cagles currently own two of the motorcars, and have bought, refurbished, and re-sold many more.

“My son-in-law, and his dad had a ride on the Smoky Mountain Railroad, and he invited me to go with his dad. I rode with him, and that is all it took. Just one time,” Phil said. “I got home and told Shirley that it was unbelievable. I purchased one from California and we’ve been riding ever since.”

Through this hobby, the Cagles have been to Vermont, South Dakota, North Dakota, Montana, Colorado, Oregon, Canada, and more. Just last weekend, they participated in an excursion on the Autauga Northern Railroad in Alabama.

“We get to travel and see the world on the rails. We have also developed lifelong friends. There’s about 1,600 members of NARCOA. Different people come to which ever excursions fit their schedule,” Phil said.

“Usually when we go into the different towns, we’re a novelty,” Shirley said. “Everyone comes out and wants to see the cars, especially the children.”

Later this summer, they are doing a week–long 1,140-mile excursion in Canada on the Hudson Bay Railway.

“We will travel from The Pas to Churchill in Manitoba. The town of Churchill doesn’t even have roads that lead to it, but it has a railroad. The area we will travel will be very remote,” Phil said.

“Churchill is the polar bear capital of the world. Also, beluga whales migrate there. We are excited,” Shirley said.

After joining NARCOA, a new railcar owner is mentored on their first excursion. The new member has to pass an exam.

The motorcar has a break, and a throttle. The throttle has two speeds. Each motorcar has a tow bar, so if someone’s car breaks down, it can be towed along.

“It’s not hard to operate, but you have to stay alert,” Phil said.

“It’s about the journey, not the destination,” Phil said.

The Cagles said that the question they get asked the most is, ‘How do you keep from getting run over by a locomotive?’

“We have a track warrant. We have permission to be there, and no one else. If there is a train, we have a railroad representative with us, leading. If one is coming, then we will pull over to a side rail. It is well orchestrated,” Phil said.

The Cagles and other motorcar operators have all the comforts of travel when on excursions. They stop for breaks and stay in hotels each night. Meals are usually arranged in advance.

The Cagles would love to see more people get involved in the hobby, especially younger people, noting that most of the people currently involved are at retirement age.

“I never knew he could work on things like this. He used to be an executive at State Farm! We have always had boats and motorcycles, so I knew when we retired, we’d do something, and it just happened to be this. We’re so happy,” Shirley said.

“We traveled before this, but this is so much fun, more adventurous. We were riding every month over in Blue Ridge, but then that got shut down. It was a good thing because it forced us to go further out. We have enjoyed it so much,” Phil said.