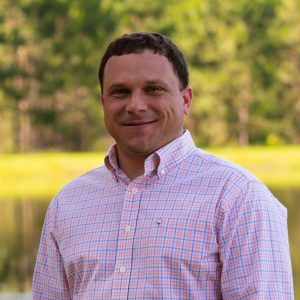 Harper lives in Ocilla and is a seventh-generation farmer. Harper is currently serving Georgia’s 7th Senate District. He assumed office in January 2013. His current term ends on Jan. 9, 2023.

He graduated from Abraham Baldwin Agricultural College with an associate’s degree, and also has a bachelor’s degree in agricultural engineering from the University of Georgia.

“I’ve tended the same piece of dirt that someone in my family has tended for 125 years. Agriculture is who I am. I have been involved in agriculture industry from a lot of different perspectives,” Harper said.

Harper got his start in politics by helping with Gary Black’s 2006 Agriculture Commissioner campaign. Black is the current agriculture commissioner of Georgia. He is not seeking re-election.

In 2007 he also had the opportunity to do a Congressional Fellowship with then Senator Saxby Chambliss. There, he got to work on the 2008 Farm Bill.

“Working for Senator Chambliss is where you could say I got bit by the political bug,” Harper said. “A few years ago, the opportunity presented itself when a sitting state senator decided to not run for reelection. I had a lot of folks encourage me to run. It’s been a phenomenal opportunity.”

Harper continued, “When Commissioner Black decided to pursue other opportunities, it opened up that possibility. It was one of those things that is hard to pass up. It gives me an opportunity to have a bigger voice for the agriculture industry and serve an industry that has served me and my family so much.”

According to Harper, the Agriculture Commissioner is the voice for agriculture in the state of Georgia, from both a policy and a public relations standpoint.

“It’s a person who helps spread the message about Georgia agriculture, and at the same time is willing to make sure both the state and the federal levels are ensuring that we have the right policies and regulations in place. Agriculture is our state’s number one industry,” Harper said.

If Harper is elected as Agriculture Commissioner, one of the main things that he wants to do is continue the Georgia Grown program, which was started by Black.

“It has been a phenomenal program. This is a continued opportunity for us to build on that brand that we have of Georgia products. It gives the producers the ability to put that stamp on that product, and it gives consumers the confidence to know where that product comes from,” Harper said.

Harper also hopes to find ways to champion and product the industry, by continuing to work and build on the Freedom to Farm Act. Harper also wants to continue to partner with educational systems to encourage the next generation who want to be involved with agriculture.

“I want to treat agriculture to the level of importance that it is. We have to continuously have the conversation about how we can protect the industry. We do that by empowering our farmers and our producers here at home,” Harper said.

Harper is running unopposed in the Republican Primary for Agriculture Commissioner. Winfred Dukes, Nakita Hemingway, and Fred Swann are running in the Democratic primary.

Looking toward the November election, Harper says that he is the best candidate for the position, because he “lives and breathes agriculture.”

“I am involved in it every day. Its more than a job, it’s my way of life. I personally understand the unique challenges that the industry faces. I think I’m the only candidate that has boots on the ground experience,” Harper said.

Early voting continues through Friday, May 20. Election Day is Tuesday, May 24. For more information about Harper, visit tylerharperga.com.