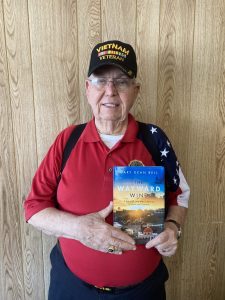 REBECCA HAZEN/Dade County Sentinel
Gary Bell has published a book, an autobiography of his life, “The Wayward Wind.” He is holding two upcoming book signings on May 28 at McBride’s Bookstore, and on May 29 during the services at Trenton First Baptist Church.

Dade County citizen Gary Bell has written his first book, an autobiography titled “The Wayward Wind, A story of one man’s service to God and Country.”

“Like the young drifter in the popular song from the 1950’s entitled, ‘The Wayward Wind,’ Gary D. Bell has been everywhere. The Wayward Wind is an account of his life’s work and travels,” the book description reads.

“It’s an autobiography of my life growing up, 20 years in the Army, 30 years as a missionary, and my time here in Dade County. It’s quite the full story,” Bell said, who turned 85 this week.

Bell noted that it took him many years to write the book, which he started writing during his spare time in Puerto Rico. He wrote it because he wanted to leave a record for his family.

“I have been through so many experiences. I wanted to leave something for them, to grow on,” Bell said.

Bell shared some stories that are detailed in the book. Bell was born in Blackwell, Okla., and then moved to Topeka, Kansas, where he got involved in the Boy Scouts, and also worked in a nursery. He was also involved in his local church. The family again relocated to Gulfport, Miss. In Gulfport, he obtained rank of Eagle Scout.

Bell also spoke about his time in the Vietnam War.

“The turning point of my life was probably the 23rd day of August 1969,” Bell said. “I was a military intelligence officer with the 25th Infantry Division. I had just brought information that wiped out the supply company of a Vietnamese Army regiment. And they wanted me bad. They had blood in their eyes. They offered a price on my head, dead or alive. They sent me some false information and I didn’t evaluate it. I took two companies of infantry into an ambush. We had a lot of men killed. That was the day that God spoke with me.”

Bell met and married his wife Gladys in Panama, during his time in the Army. Gladys was from Puerto Rico. They had three children, Gary Edward, Philip, and Angela. Angela was adopted from Vietnam.

Bell retired from the Army in 1978, and he spent the next 32 years in Puerto Rico as a missionary. He built two Baptist churches and he also helped build Puerto Rico Baptist College.

“We built churches out there in the mountains. I farmed out there. I cleared land with a machete and axe. I planted coffee trees,” Bell said.

When Gladys was diagnosed with Alzheimer’s in 2002, they stayed in Puerto Rico at first. As the disease was advancing, Bell knew they needed to relocate. He decided to move to Dade County, where his son Philip is a teacher at the High School.

“I liked Dade County immediately. We were up here visiting once, and we came to McDonalds for breakfast. I walked in, and I had my Veteran’s cap on. A little boy about 5-years-old stood up and said ‘Sir, thank you for your service.’ I’ve never had anyone, especially a child, thank me for my service. I said to Gladys, ‘If this is the way people raise their children here, this is where I need to be,’” Bell said.

Gladys passed away in 2012. They were married for 52 years. He met and married his current wife Brenda a year later.

“When I married Brenda, I told her I traded a Puerto Rican pineapple for a Georgia peach,” Bell said.

In Dade County, Bell became involved with the American Legion Post 106. He helped to form the Honor Guard in 2013, which provides military honors at funerals.

“Since then, we have done over 350 veteran’s funerals. I just recently retired from that,” Bell said.

There have already been two book signing events for Bell’s book, and there are two more later this month. A signing will be May 28 at McBride’s Bookstore from 1 to 3 p.m., and on May 29, at his church, Trenton First Baptist Church (TFBC), at both services.

All proceeds of his book are going to TFBC, to the foreign missionary program.

“God gave me the ability to write it, he gave me the funds to publish it, so I am giving it all back to him,” Bell said.

“The purpose of the book is for people to look to the Lord Jesus Christ to do his will in their lives. He has used me, and he has saved my life on so many occasions. He was there continuously taking care of us,” Bell said.

“The Wayward Wind” will be sold at the book signings, and on Amazon.com.