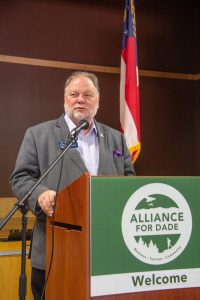 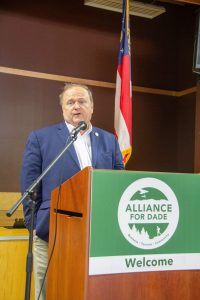 The Alliance for Dade held a networking Lunch and Learn event on Thursday, May 5, where attendees had the opportunity to hear speakers Representative Mike Cameron and Senator Jeff Mullis.

Alliance for Dade Chair George Williams noted that it was almost to the day, one year ago, that the Alliance held their first Lunch and Learn, which was their first event ever.

Williams noted that the Alliance now has 105 investors, and they hope to add about 25 more. The Alliance is also continuing to work on tourism, finding and hiring a president, and economic development.

“If you’re going to attract workers, you have to have an attractive work force,” Williams said.
Representative Cameron and Senator Mullis spoke to attendees about the legislative work that has been done in Georgia.

Cameron represents District 1, which is Dade and Walker counties. He is running for reelection.

“Thank you for allowing me to serve. I wouldn’t call this a job. This is a calling,” Cameron said. I’m trying to take what I’ve learned all these years in business and politics and applying it to this job. I’m building relationships. I have worked on a lot of bills, but I want to build relationships that we need long term for Dade and Walker.”

Cameron noted some of the events that he had attended in Dade County, including the Dade EXPO during the holiday season, and being a judge for the Smoke on the Square barbecue contest.

Cameron also spoke about what he worked on in the recent legislative session.

“One of the things that I spend time on, after relationships, is I am on the Agriculture Committee. We had some substantial bills come out this year,” Cameron said.

The General Assembly also passed the Freedom to Farm Act in early April.

“We have farmers across the state of Georgia that have problems sometimes with people living out in the country, and they’re saying, ‘I don’t like the smell,’ or ‘I don’t like that there’s pigs over there.’ And then they sue the farmer. It’s a nuisance. We are trying to protect our farmers.”

Another bill, Senate Bill SB 396, will help people in Georgia get fresh food.

“Forty percent of our produce in Georgia goes to waste every year,” Cameron said. “This bill allows the food banks in Georgia to buy food at a reduced price that is less than Grade A, maybe a blueberry that has a split in it, but it’s still good.”

The fourth bill that was passed, HB 1303, is an effort to education children about where their food comes from.

“It’s an adventure. I’m dedicated to this long term. I like to be involved,” Cameron said in closing.

Senator Mullis represents the 53rd District, which includes Dade, Catoosa, Chattooga and Walker counties. Mullis has announced his intent to retire. His term will be up Jan. 9, 2023.

Mullis also spoke about legislation that has recently been worked on.

“There were about 6,000 bills and resolutions that went through in one session. Out of some of those bills that passed, we don’t think that males should play female sports. Then, critical race theory, they cannot teach that in schools here. We made sure it’s not going to happen. We also have to make sure that we pay attention to Russia and China. We’re not going to deal with their government,” Mullis said.

Also passed was Senate Bill 345, that would ban any state and local governments requiring anyone to get a COVID-19 vaccination.

“I think everyone should be vaccinated, but I think it should be your choice,” Mullis said.

Mullis also spoke about Cameron, and their time working together.

“Mike Cameron is probably the strongest house member from District 1 that I have ever served with. Thank you, I have enjoyed working with you,” Mullis said.

The Georgia Primary Election is ongoing, so Mullis also encouraged voters to research the 53 District Senate candidates and choose his replacement wisely.

“I have had a great journey. Most of the people in this room have been on this journey with me, and I thank you for that. I have experienced a lot of things. I am 62. I never knew what I was going to do, I never had a plan, and I still don’t. I am looking forward to finding out what I am going to do for the rest of my life. It has been a true pleasure to represent you,” Mullis said.