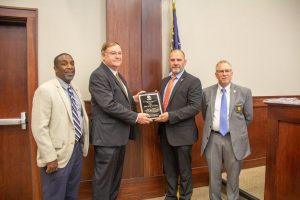 The 17th annual Law Enforcement Appreciation Ceremony, held jointly by the Trenton-Dade Optimist Club and the Georgia Fraternal Order of Police, was Tuesday, May 3.

Franklin continued, “To be in law enforcement you must have the patience of Job and the wisdom of Solomon. You must be a diplomat, a legal supporter, a grief and mental health counselor, and make decisions in a split second. We call upon law enforcement to do the right thing at the right time.”

Dade County Executive Ted Rumley read a proclamation that designates the week of May 15-21 as Law Enforcement Appreciation Week.

“We appreciate every one of you in the law enforcement family. We try to be here to support you. You are all important to us and the community. It is our job to make sure that you have the means to do your job,” Rumley said.

“My full-time job is Director of Emergency Services. You, the law enforcement, are always the first on scene for a lot of these incidents. I don’t think a lot of people understand what you deal with every day. I am privileged to work with such a group,” Trenton Mayor Alex Case said.

Carlton Stallings, Past President, and National Trustee of the Georgia Fraternal Order of the Police, read the names of fallen officers. 54 law enforcement officers in Georgia lost their lives in the line of duty in 2021.

Stalling also recognized two officers from Dade County that lost their lives. Sheriff Felix Cullman Graham died in a vehicle crash on Nov. 21, 1955. Police Chief Herschel Hutchings was struck and killed by a vehicle on Feb. 18, 1968.

“First and foremost, he was a friend,” Wilson said. “When I got elected in 1996, he had already had about 12 years under his belt as a sheriff here in Dade County. It wasn’t uncommon for me to call for advice. He would always give me advice in the way he saw it. Those of you that know me and him, we are oil and water. But I think that is what made us such good friends. Our goal was always the same, to enforce and uphold the law, and do what was right in our counties.”

Special Agent Rogers was named as Officer of the Year.

“Rogers began his career with the GBI in 2015. He has investigated several brutal homicide cases, including two in Dade County. This agent solved a cold case in Dade County involving one of the most prolific serial killers in the United States, Samuel Little, bringing much needed closure to the family. He is respected by local law enforcement to the point that he is contacted and is relied upon heavily for interviews and interrogations, and assistance in working cases,” Stallings said.