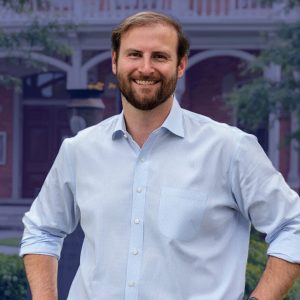 Patrick Witt is a Republican candidate running for Georgia Insurance and Fire Safety Commissioner. He wants Dade County voters to know the importance of the Commissioner’s job, and how it affects constituents in their everyday lives.

Witt decided to run for the Insurance and Fire Safety Commissioner position because he wanted to serve and have an impact.

“I want what I do to matter. My experience in the federal government showed me that there is huge opportunity for impact while working in the public sector, and oftentimes it lacks people that have a private sector background,” Witt said.

Witt is a Georgia native. He played quarterback at Parkview High School before playing in college, and then had a short stint in the NFL. After, he worked in finance, before heading to Harvard Law School. After law school, he worked as a management consultant for large industries.

“I had an opportunity to serve in the Trump administration. I was deputy chief and then chief of staff of the Office of Personnel Management. We were the federal HR policy wing, and the employee benefits wing for the entire federal government work force,” Witt said.

The Georgia Insurance and Fire Safety Commissioner helps to regulate the entire insurance market in the state, which is about 30 billion premiums annually. The commissioner has final approval of the plans and policies that are offered, and they can prosecute fraud.

“Georgia is the second worst in the country in terms of fraud. This is something I would want to address in the office,” Witt said.

Witt continued, “The Insurance Commissioner’s office affects every single person in the state of Georgia. It’s a big expense for people, it’s a benefit, but it’s costly. It ultimately affects everything in our lives if we can’t afford insurance. If insurance is not honoring a claim that they should be honoring, the Commissioner can step in and address those situations.”

For the Fire Safety side of the position, the Commissioner is the chief fire marshal for the state, which entails inspections of buildings, elevators, amusement park rides and more.

The Commissioner will also handle arson investigations, and communication between the different firehouses around the state and can serve as a go-between for legislature.

Witt’s goals, if he wins the election, are to keep the cost of insurance low, keep insurance from going “woke” and keeping insurance companies honest.

“I came out very strongly against HB 1013 in its original form, the mental health bill. It mandated insurance companies to cover treatment of services for anything that is a mental health disorder, but it gave the definition of a mental health disorder over to the World Health Organization. That would have required Georgians to basically pay more every month in premiums to subsidize gender reassignment surgery, hormone blockers, and so on. I don’t think Georgians should be forced to pay for something that violates their conscience like that,” Witt said.

Witt noted that he also wants to make it clear to insurance providers that he will not tolerate Georgians to be discriminated against, based on their decision whether or not to take the COVID-19 vaccine.

In addition, Witt wants to establish a 24/7 hotline, so if anyone has questions about potential insurance problems, the Insurance Commissioner’s office can be a resource.

“Multiple people in the agency have reached out to me. King doesn’t show up to work. This is not his primary focus. He’s in the office maybe two or three times a month, I’m told. I don’t think that’s right. I can promise Georgians this will be my primary and only focus,” Witt said.

Witt continued, “President Trump has endorsed my campaign. I am the only Insurance Commissioner candidate in the entire country who can say that. We think that is going to be a winning message.”

Early voting is currently underway. Election Day is Tuesday, May 24.