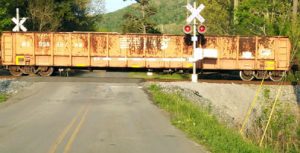 Photo courtesy of Jim Bryant
A Norfolk Southern Railway car blocks the crossing at Sells Lane in Trenton. According to County Executive Ted Rumley, instances of trains blocking crossings has gotten worse, and as of recently, the county’s contact at Norfolk Southern has not been responsive to calls for help. Rumley, and citizens in Dade County are concerned, and want a solution.

Norfolk Southern Railway trains are consistently blocking and cutting off streets, residents, and businesses in both Trenton and along Highway 11 in Wildwood. Dade County officials, employers, and residents are frustrated, worried, and want a solution.

“Clark Street all the way to the Tennessee line is getting worse. People on Steele Road and Guinn Road are having to hand their kids through the train cars to get them to the other side. The school bus driver can’t sit there with a loaded bus and wait. Those people up there are having a lot of issues. I can’t say how many texts I’ve gotten from them,” Dade County Executive Ted Rumley said.

Wildwood residents Krystle Stewart and Amber Lawson both live near the railroad crossing on Steele Road and Guinn Road.

“The train stops almost every day for over an hour. If they are going to stop, they should get out and disconnect the cars, so the crossing isn’t blocked. My daughter has cerebral palsy and a lot of other health problems. Her appointments are two hours away and if we can’t get out in time, we have to reschedule. There is one way in and one way out. Half the people that live on these roads are disabled or elderly. I just hope there is never an emergency while a train is sitting there. Someone may lose their life.” Lawson said.

According to Rumley, there was another issue several weeks ago when there were over 20 cars left on the tracks for about three weeks, blocking one of the main roads to the Recycling and Transfer Station.

“The people that work for the railroad say it’s because the trains are so long now. It takes them forever to break them down in Chattanooga. I’ve talked to the trainmaster, and one time it was broken down. But other times the train has just been parked. It’s not the people’s fault though. That is poor planning on their part. It’s going to cost a life if something is not done about it,” Rumley said.

According to Alex Case, Director of Emergency Services, thankfully, there hasn’t been an issue yet regarding an ambulance not being able to reach a person in need.

“It has always been a problem for years. It’s been more of a problem lately since more stuff is going by rail now. We’ve got two ways to go if the train is blocking both North and South Industrial Blvd., but it’s still a delayed response for us,” Case said.

In the last few weeks, Rumley noted that he has left many messages for Connor Poe, Regional Vice President Government Relations of Norfolk Southern Corporation.

“I called him four times, and today was the first time in weeks that I’ve gotten hold of him. He said he didn’t even get my messages. He is our only government relations person in Atlanta. He is supposed to be able to handle this,” Rumley said.

Rumley noted that Senator Raphael Warnock has been responsive and representatives from Warnock’s office have spoken to him multiple times.

“We’ll just see what Warnock can do. We’re a county government, and are limited to what we can do,” Rumley said.

Rumley noted that throughout the years, the issue of the blocking trains has ebbed and flowed in different areas. A few years ago, it was exceptionally bad by the Industrial Park, causing some employers to consider relocating.

Chris West is the Plant Manager at Bull Moose Tube, one of the companies located in the Industrial Park. According to West, trains will sometimes cause problems multiple times in a week.

“Sometimes it is for a few hours, sometimes it is for three quarters of a day. Sometimes it causes issues as far as our truck traffic bringing in materials, especially if the train blocks both sides of the industrial drive. Those trucks will then back out into the street and down the main highway, which blocks traffic there. Our employees have to leave extra early so they can make it here on time. It is troublesome,” West said.

Teri West and Heather Tishaw, who live on Clark Street and Church Street, are also affected by blocking trains.

“Clark Street is a dead-end road. The train blocks our path multiple times a month. Sometimes it’s for 30 minutes, sometimes it’s for several hours. It has caused us to be late for work and, when our children were younger, it has caused them to be late getting to school. I have gone to the grocery store and tried coming home only to find the train blocking the road. I’ve had to scramble to find family or friends that were home in which I could take my perishables to so that they wouldn’t ruin. It’s more than an inconvenience for all that live down this street. It could definitely be a hazard if it’s blocking and there is an emergency. I know and understand that trains are vital, but if it would be possible to limit their blocking a road without any other means of access to 15 minutes or less, that would be helpful,” West said.

“Two weeks ago, we had a train that sat on the tracks for six days straight. I called and spoke with the representative who ensured me it would be moved that day and that was the fourth day it was there. It wasn’t moved until two days later. I literally work on the other side of the tracks and had to go all the way around to get to work,” Tishaw said.

According to Norfolk Southern’s website, nscorp.com, “Norfolk Southern makes every effort to minimize the time that trains interrupt motor vehicle traffic at crossings. However, operational situations, such as track or weather conditions, might require a train to stop or slow, resulting in a temporarily blocked crossing.”

The website continues, “If a train blocks a crossing for an extended period, contact NS Police at (800) 946-4744. This number is on the emergency notification sign posted at every highway-rail grade crossing.”

The website also notes that the trains operate 24 hours a day, seven days a week, and schedules can change frequently. For safety and security reasons, Norfolk Southern does not provide train schedules to the public.

“The railroad has been there for a long time. These cities build streets and roads and sometimes they don’t take into account that the crossing is there. The railroad is a complicated beast. This is one of our primary routes from Birmingham to Chattanooga. That area sees a lot of trains. When they are in proximity to a yard, in this case Chattanooga, they may have to wait. It is a lot more complicated than just ‘there’s a train on the tracks,’” Connor Spielmaker, Norfolk Southern Media Relations Manager, said.