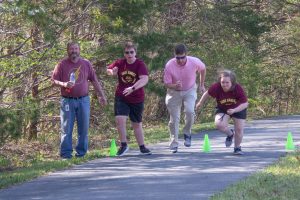 Special education students at Dade Schools had fun and showed off their athleticism and competitive sides during the Dade Games on Friday, April 22.

According to Susan Reyes, Director of Special Programs, the event was formally the Special Olympics. The first Dade Games was held 2019. Then, because of COVID-19, it couldn’t be held, so this was the event’s second year.

“We designed it for our functional program students. This is a day for a little bit of competition and a whole lot of fun,” Reyes said. “They are not excluded from participation in regular sports, but sometimes they can’t meet those requirements. Even when the elementary schools have field days, those activities are designed for the typical student. We wanted to do something that was developmentally appropriate.”

The students were given a fire truck and police escort to the New Salem Community Center, where the event was held. There were balloons tied to the front of the school buses.

Community members, teachers, and family members applauded the students as they lined up for the opening lap around the track, holding a banner and an American flag. “We Are the Champions,” by Queen played as they walked.

“You are all champions. Before the games have even started, you are champions. I know you are looking forward to competing against your peers and your teachers. I will be cheering you all on. To the parents, extended family, community members, thank you all so much for coming, It is a great day for our athletes,” Superintendent Josh Ingle said before the start of the games.

Some of the games that the kids played included bowling with inflatable pins, badminton, soccer, corn hole, obstacle courses, and racing. All the activities were lined around the track, and the groups of students and teachers rotated through the different set ups.

Liam Reynolds, in 12th grade, was one of the Dade Games participants.

“It’s fun to spend time outside with people that you know and get along with. My favorite activity today was the running,” Reynolds said.

Amber Joy Kent’s son, River Kent, who is in fourth grade, participated in the Dade Games.

“This is one of the best things in the world for these kids,” Dale McCreary, parent to 11th grader Colby, said. “Including when this started as the Special Olympics, this is my son’s seventh one he’s done. After not having it for two years, it’s nice for him to be able to get back out there and do all of this. They get the camaraderie with their peers and have fun with the teachers. It’s a special time.”

“This is all about exposing opportunities for all kids. These kids, we get to see what they can do in the classroom and the tasks that they work on. We get to watch them grow academically. Then, to give these kids an opportunity to come out here and show their athletic ability, it is amazing. As a father of a child with similar needs, this has a special place in my heart,” Ingle said.

Just then, a student asked Ingle to race her and another student. Ingle lost to the two students with grace.
“That’s what it’s all about right there,” Ingle said after the race.

After the games, the students all received medals, handed out by Ingle and Board of Education Chair Carolyn Bradford. Everyone also received lunch, which was cooked and prepared by community members.

“This has been fabulous. The people in this community here, they cooked for us, and they have prepared the grounds. They have sent volunteers. The way that the Dade County community embraces our kids, it is phenomenal,” Reyes said.