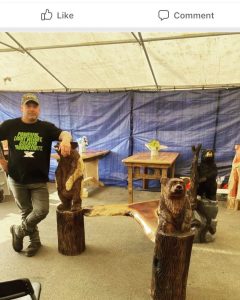 Billy McCurry has been working with wood his whole life, but only recently started using a chainsaw to create wooden sculptures. McCurry sells his work all over the eastern and Midwest United States. Here, he poses with some of his pieces at an arts and craft show.

Billy McCurry has worked with wood since he was young as a hand carver and has made a name for himself in the last two years as a chainsaw carving artist. He creates works of art for people’s homes, yards, and businesses.

McCurry, who was born in Louisiana but has lived in Dade County ever since, has been around the art of carving since he was young.

“I had a neighbor that was a chainsaw artist. I had been watching him for 30 years and it just sunk in my head. I picked it up over the years,” McCurry said.

At first, McCurry only hand carved pieces. But, when the pandemic started, he picked up a chainsaw.

“I used to do construction work, and I used to be a truck driver. When the pandemic hit, I didn’t want to be around anyone and get sick. I was drawing unemployment and I didn’t want to just to sit around. I figured I could work and make my own money, so I picked up a chainsaw,” McCurry said.

McCurry uses different types of wood including cedar, yellow pine, boxelder, and black walnut. He buys wood, and some pieces are donated as well.

“First, I go out and get a log. I look at the piece of wood and decide what it is going to be. It is what I see in it. Every log is different. If I see an owl in it, that’s what I am going to carve. I might have a log out in my yard for a year before I see what’s in it. I can use any log for my bears because I have done so many bears. I can just start cutting bears, no problem.,” McCurry said.

McCurry continued, “The art itself is a challenge and you have to have control over the chainsaws at all times.”

A piece will take from 35 minutes to three weeks, depending on the design and item. Some of the pieces that he carves includes bears, raccoons, pumpkins, moons, mountain men, owls, birds, Santa Clauses, and benches. The bears, which are featured in a variety of sizes and poses, are the most popular. He will also make customized pieces.

“My favorite carving that I’ve done is a beaver holding a chainsaw, and it was wearing a hat. That was a wicked piece. That was the hardest piece I have ever done,” McCurry said.

It has become a family business. McCurry’s wife Sheena helps with painting the pieces, taking phone calls for orders, and taking care of the paperwork.

McCurry sells his pieces all over the eastern United States and in the Midwest. He goes to arts and craft shows throughout the year, and during the summer months he can be found at the Flea Traders Paradise flea market in Sevierville, in the Smoky Mountains. Multiple businesses in the Smoky Mountains sell his bears, as well.

Potential customers who are interested in McCurry’s work can get in touch with him on Facebook, listed under B&S Chainsaw Carvings, and by calling him at (256) 979-4012.