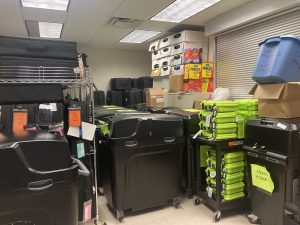 REBECCA HAZEN/Dade County Sentinel
The Dade County Board of Elections will be housed in a new building, to be built with funds received from a land auction. Election Supervisor Lowanna Vaughan said that a new building is needed because they have no storage space. Each time a piece of equipment needs to be used or tested, everything else in the storage room (pictured) needs to be pulled out into the hallways.

The Dade County Board of Elections will get their own building, built with funds that were received from a recent land auction.

An auction was held April 9, to sell parcels of 32 acres of land on Back Valley Road. According to Dade County Executive Ted Rumley, about $253,000 was received from the sale.

The land on Back Valley Road was originally bought when Larry Moore was the sole commissioner, with the intention to expand the landfill that was operational at the time.

“In 1992, everything changed to a five-person commission. They decided it was not feasible to have a landfill anymore,” Rumley said. “They went through the process of closing it, and that land was never touched. We kept it all these years, but now, it’s a seller’s market for real estate.

Lowanna Vaughan, Election Supervisor of the Dade County Board of Elections, said that a new building is greatly needed.

“We have got those machines scattered all over the place and up and down the halls,” Rumley said.

Vaughan also noted that they recently tested all their equipment in the commission meeting room, and the circuit breakers kept tripping.

“This election, I am mandated by the state to put out one BMB (the screen used to mark the ballot, with a printer beside it) for every 250 people. I am going to have anywhere from 12 to 15 BMBs in that meeting room. By the time you put all those machines in that room, and the scanner, and then you have all the people there to work the election, it takes up most of the space. It doesn’t leave a lot of room for voters. You also need to make sure voters have privacy,” Vaughan said.

“I’ve been through there with my name on the ballot, and people want to talk to me. I’m nice about it, but I say, ‘Look, I really can’t talk to you right now.’ Usually during election time, I come in the back way,” Rumley said.

“They have all been really good about not entering the enclosed space unless they are voting,” Vaughan said.

Rumley noted that different locations were looked at, but he thinks they have decided to put the new building on a piece of property near the Bank of Dade, because it is centrally located.

In addition to housing the Board of Elections offices and storage, there will be some other small office spaces as well, for example, for the Industrial Development Authority.

Rumley said that preparations for the new building would start as soon as possible.

“As soon as we close this deal out, we will go and make the purchase. We will start clearing immediately. I don’t know that we will be able to move in by November, but we’ve got all summer to work on it,” Rumley said.