Photo courtesy of Patrick Hickey
Cooper Hickey was sent to Vanderbilt Hospital for injuries he received during a fire at his grandmother’s house. The house was a total loss, but everyone got out safely. The Hickeys are thankful for Cooper’s health. 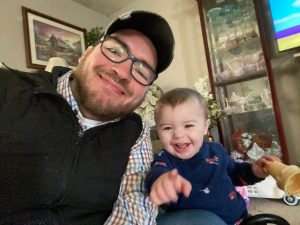 Patrick Hickey’s 16-month-old son, Cooper, and his mother-in-law are doing well after a house fire on Friday, April 1. The home was a total loss, but the family is thankful that everyone is safe, and that their son is recovering.

Hickey, his wife, and their eldest daughter were driving on Friday afternoon, when they received a phone call from his wife’s mother. Cooper was at her house at the time.

“She was hysterical, saying that her house was on fire. I said, ‘Excuse me?’ She repeated, ‘My house is on fire.’ She asked if we could get there. I got there quickly, and called 911 to get the fire department there,” Hickey said.

Cooper’s grandmother received minor burns to her fingers, and some of her hair burned as well. Cooper received first and second degree burns on his back, head, shoulder, and hands. Cooper was in the room where the fire started.

According to Hickey, it was a hot, fast burning fire. The house was a total loss, including a vehicle and a nearby playground for the kids.

“I was working long before the fire departments got there. My mother-in-law was sitting in the truck watching her house burn down. I turned on the garden hose. I wasn’t just going to sit there and do nothing. At that point it was getting bigger and hot enough that I started trying to keep the propane tank cool. I did that until the fire melted the PVC pipe and no more water was coming out,” Hickey said.

Cooper was transported to Erlanger Hospital, before being flown by Life Force Air Medical to Vanderbilt University Medical Center in Nashville. His mother was with him, and Hickey, who volunteers with Davis Fire Department, stayed behind to try to help the firefighters.

“The first fire trucks got there 20-25 minutes after the call came out. North Dade, Trenton-Dade and West Brow Fire Departments came. I stayed to help until they had enough manpower,” Hickey said.

Hickey noted that the water pressure was low in the fire hydrants used. Hickey asks the Dade County Water and Sewer Authority to investigate this and to please make improvements.

“This could happen again where the fire departments don’t have enough water pressure,” Hickey said.

After the fire departments inspected the burned remains, it was determined that the fire started because of electrical issue.

“The house is a total loss; it is down to the foundation. Surprisingly, we have been able to find some items that were hardly burned or not burned at all,” Hickey said.

Hickey continued, “We all have our moments. There were a lot of memories that burned down with the house. My wife and her sisters grew up in that house. My wife was living there when I first met her. My daughter took her first steps in that house. We are healing as well as we can, with everything that is going on.”

While Cooper was being transported, the EMS workers first made sure that his airways were clear.

“The hairs inside of his nose had burned so that was a big concern,” Hickey said.

Cooper has since been released from the hospital and had a follow up appointment last Friday. The doctors are hopeful that future appointments can be done by Zoom calls.

His treatment has included changing out cloth dressings each day and taking pain medicine and vitamins every six hours. The swelling may take about a month to fully go down, and the burns are estimated to take longer to heal.

“We are staying busy. He just turned 16 months old on April 4,” Hickey said. “It could have gone a million different ways and we are ecstatic that it didn’t. It could have been a whole lot worse; we could be planning funerals right now.”

Friends and family have set up Go Fund Me and Meal Train pages for the family. They can be found at https://mealtrain.com/d85mzz, listed under “The Slack/Hickey Family” and https://gofund.me/1d1de865, listed under “Medical expenses and starting over.”

“We want to extend our thanks to all the fire departments, to the Vanderbilt staff, the Erlanger staff, to the CHI memorial paramedic staff who transported him, and everyone in the community that has donated clothes, food, and funds toward the family. We appreciate what everyone has been doing,” Hickey said.

Hickey also said that there would be a free car cruise-in event Saturday, April 23, from noon to 4 p.m., at Veteran’s Park. There will also be live music.

All donations will go toward his son’s hospital bills and to help rebuild his mother-in-law’s home.