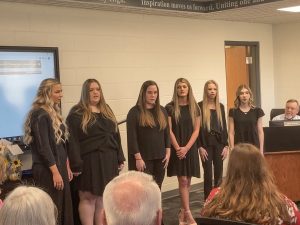 REBECCA HAZEN/Dade County Sentinel
Members of the Treble Ensemble and Mixed Chorus, from left to right, Macy Linder, Savannah Guffey, Kamryn Phillips, Hannah Shupe, Natalie Pierce, and Miranda McAllister, performed at the Board of Education meeting. These singers competed in the Women’s Trio at the GHSA Literary competition. They sang, “Johnny Said No!” at the meeting, which was one of the songs performed at the competition.

James Fahrney, Jr., Principal of Dade County High School, spoke to the Dade County Board of Education about implementation of the “Say Something” program during the Monday, March 28 meeting.

Say Something is a no-cost program created by the Sandy Hook Promise Foundation, founded by family, and loved ones of those that were killed at the Sandy Hook Elementary School shooting in 2012. The program teaches middle and high school students to recognize the warning signs of someone at-risk of hurting themselves or others and how to say something to a trusted adult to get help.

Fahrney noted that, over time, the number of referrals for fighting, weapons, bullying, battery, disorderly conduct, drugs/alcohol, and threats have gone down in the Dade County School System. In 2021-22 there were 27 referrals. In 2016-17, there were 88 referrals.

“We have seen discipline go in the right direction, but even good schools are not immune to violence, suicide and threats,” Fahrney said. “Mental health concerns are now far greater than they ever have been.”

“The big difference is that a lot of our kids have the mindset where they don’t want to snitch. What Say Something teaches the children is that when you’re snitching, you’re doing it to get someone in trouble. When you’re saying something, you are trying to find help for that person,” Fahrney said.

The Say Something program, which is free, operates a 24/7/365 call center. Professionals engage in two-way dialogue. The tips, which are anonymous, are then vetted. The tip management system was developed by industry experts and has state of the art security. People can reach out through an app, website, or by phone.

There will be three to five team members at each site (Central Office, Dade Middle and Dade High School) that will receive training. These members will receive the notifications of problems. The program will be ready to implement in fall 2022.

Also, during the meeting DCHS Assistant Principal Brent Cooper spoke to the board about replacing a science course.

“Our department feels like forensic science is not meeting the needs of all our students,” Cooper said. We feel like that was a narrow emphasis, and this new course would be broader.”

The board approved the curriculum change.

In recognition of March being Music in Our Schools month, the board was treated to a musical performance by student singers Macy Linder, Savannah Guffey, Kamryn Phillips, Hannah Shupe, Natalie Pierce and Miranda McAllister.

Director of Choral Activities Gabrielle Haston spoke to the board.

“We have had a banner year,” Haston said. “Our eighth-grade chorus wrote and premiered a brand-new piece of music at our Christmas concert. Art students exhibited at the Christmas EXPO, Marching Wolverines received superior and excellent ratings at marching competitions, and our one act play cast took third place overall, the highest place in 15 years, at the GHSA competition.”

Haston said that there is still plenty more to come. There will be three more school art shows, multiple band concerts, the high school mixed chorus will compete on the national level at Walt Disney World, and the spring musical will be in May.

Barrett noted that, as a whole district, attendance is at 92.9 percent. Pre-pandemic, attendance was at 95 percent.

There have been 31 DFCS (Division of Family and Children Services) referrals so far for this school year.

Barrett noted that she and other counselors have personally done 46 home visits so far this year.

“We give the families the option to choose which agencies before making a referral. We encourage all of our resources and we let them pick,” Barrett said.

Counselor Tinena Bice thanked Barrett for her work and dedication at the meeting and presented her with flowers. Superintendent Josh Ingle also presented Barrett with a pin.

“Social work is the art of listening and the science of hope,” Bice said.

The board approved a $20,394 change order for P&C Construction, for work on the middle school gym.

Ingle also noted that the week of March 14-18 was School Board Appreciation Week. The schools prepared gift bags for each of the board members.

The board went into executive session at the end of the meeting to discuss personnel matters. The board approved the retirements of Denise Lewis and Diane Gagliano Davis, and the resignation of Nick Hall. Alyx Case was hired as a community coach. Michelle Brooks was hired as a nutrition worker. Grace Pearson and Tiffany Long were hired as substitute teachers. Aleah Hurst was also hired.

The next Board of Education meeting will be April 25.