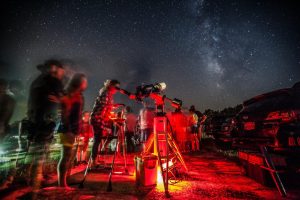 Photo courtesy of Barnard Astronomical Society
Star Parties will start at Cloudland Canyon State Park this weekend, and will be held each month through September. The public is invited to come to this family-friendly, free event. Telescopes will be set up to look at different objects in the night sky, and members of the Barnard Astronomical Society of Chattanooga will be on hand to answer questions.

The ever-popular Star Parties are back at Cloudland Canyon State Park, with the first event of the season scheduled for Saturday, April 2, beginning at dusk.

Star Parties will be the first Saturday of each month, April through September, weather dependent. The event is free to the public. There is a $5 parking fee to enter Cloudland Canyon.

Members of the Barnard Astronomical Society of Chattanooga will be on hand with telescopes to view the moon, planets, and deep space objects such as galaxies, star clusters and nebulae.

Star parties have been held at Cloudland Canyon for about five years but have not been held since the start of the pandemic.

“Cloudland Canyon provides some of the darker skies in the area,” David Brandt, President of Barnard Astronomical Society, said. “In the valley, there’s so much light glow and pollution. A lot of the objects that we want to look at, they are dim, and you can’t see them in metro Chattanooga.”

Joe D’Agostino is a member of the Barnard Astronomical Society and is from Dade County. D’Agostino helped to start the star parties at Cloudland Canyon.

“I live close to the park, so I thought I would have an unofficial event. My wife was a member of the Friends of Cloudland Canyon, so that was the connection there. The first one we did was to see the Perseid meteor shower, which occurs in August. I was surprised at how many people showed up. It was unbelievable,” D’Agostino said.

After that, the members of the Barnard Astronomical Society decided to hold official star parties at the park.

During a star party, different telescopes will be set up. The event is non-structured and informal.

“We let the public wander through the telescopes. The members are available to talk about the telescopes and the objects that they are looking at. We have folks that are well qualified and know the night sky quite well,” Brandt said.

There are different types of telescopes that the members use. There are refractors, which is a long scope with a lens. Reflectors don’t use glass lenses, but they use mirrors, and they are larger in diameter. There is also a hybrid, which uses a combination of mirrors and glass.

“We’ve also started doing electronically assisted astronomy. This is where we connect a camera to a telescope. Then we project the image of what the telescope sees through a projector onto a screen. The community can see it without putting their eye up to the lens,” Brandt said.

There will be different things to see during the star parties during different times of the year. During the spring, galaxies are more visible. The Milky Way Galaxy can be viewed, which is the galaxy that Earth is located in. Also, Andromeda Galaxy, which is the nearest large galaxy to the Milky Way, at approximately 2.5 million light years away, can be viewed. In the summer, planets like Jupiter and Saturn are more visible. The moon can also be viewed, but not when it is a full moon. A full moon would be too bright to view the details of the craters.

“We love to see people getting excited about astronomy. It can be an intimidating subject for most people. But then they get there, and they get a chance to look through the telescopes, and get to ask questions. When you look at the sky and realize that the Milky Way Galaxy has a billion stars in it, you start to realize how insignificant we are. To me, that’s amazing,” D’Agostino said.

The Barnard Astronomical Society is celebrating 100 years next year. Professor Burleigh S. Annis, of Lookout Mountain, organized the first meeting on Nov. 15, 1923, at the Central Y.M.C.A. in Chattanooga.

The Barnard Astronomical Society is 501c3 organization for amateur and professional astronomers as well as anyone interested in astronomy. Monthly meetings are the second Thursday of each month at UTC’s Clarence T. Jones Observatory in Chattanooga.